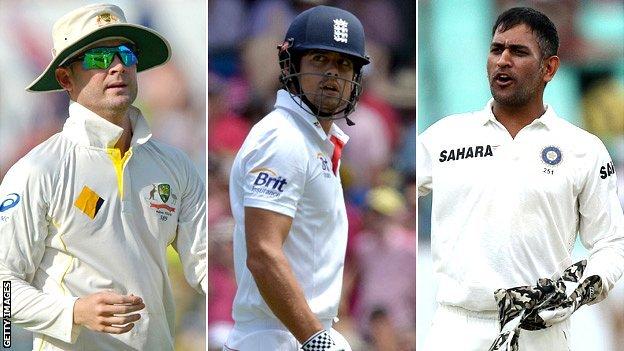 The International Cricket Council is meeting in Dubai on Tuesday and Wednesday to discuss proposed changes to Test cricket that could fundamentally alter the way the sport works.

But what are the plans? What could they mean for the future of the longest form of the game? And what are some of the interested parties saying about it all?

BBC Sport, with the help of cricket correspondent Jonathan Agnew, looks behind the news releases and official statements to bring you the facts and opinions.

In a nutshell, what changes are being proposed?

Sweeping reforms to the way Test cricket operates, that's what. Based on a highly controversial 'position paper', containing the proposals and leaked to the media in the past fortnight, we know what some of those who control international cricket have come up with, including:

"The other countries have been ambushed by this. England, India and Australia have gone away quietly over the last six months and come up with this scheme. There are so many things to worry about here and, frankly, I can't see an awful lot of good for Test cricket to come out of it."

So, quite a seismic upheaval.

Why are we talking about this now?

The short answer is that it's that time of year again - the ICC Dubai conference which features 10 Test-playing nations, three associate nation representatives and the organisation's own president, vice-president and chief executive.

But there's general agreement within the sport that Test cricket is in a vulnerable position, squeezed by the growing popularity of Twenty20, particularly in the southern hemisphere. In India, South Africa, Sri Lanka, New Zealand and even to a certain extent Australia, crowds for Test matches are falling. There are very real concerns that cricket's most traditional format could die out.

Whose idea is it, anyway?

Until this past week, even ardent cricket fans had not heard of the ICC's Finance and Commercial Affairs committee (F&CA) chaired by England and Wales Cricket Board chairman Giles Clarke. Not any more. That group are behind these proposals and are seeking to make a persuasive case for themselves as likeliest custodians of the game.

The Board of Control for Cricket in India (BCCI) is a truly heavyweight organisation, being in control of the most lucrative cricket-playing nation.

It has been suggested that, should the F&CA's proposals have cold water poured on them in Dubai, the BCCI could disassociate itself from the ICC altogether, effectively "going it alone" on the international cricket scene. India bring so much to the table in terms of broadcasting rights (more on that later) that they wield significant political influence.

India exiting the ICC is the nuclear option perhaps, but it's enough to force those in attendance in Dubai to take these revolutionary proposals all the more seriously.

"The other nations have been ambushed because they so desperately need in particular India's money," says BBC Sport's cricket correspondent Jonathan Agnew.

Is it all about money?

As well as securing the future of Test cricket? Yes.

A leaked 21-page draft of the position paper makes repeated reference to fiscal matters and most proposals appear motivated by finances. It also features a remarkable statistic: 80% of the money Test cricket makes through the sale of global broadcasting rights come courtesy of India. The contribution of the remaining nine full Test-playing members ranges from 0.1% to 5%.

A case is made for "distribution based on relative contribution", effectively the most funding going to the countries that bring the most money to the sport.

Agnew adds: "The TV rights will be sold soon for the World Cups and so on, in which India will get $560m, England $170m and those other countries - West Indies, New Zealand, Sri Lanka - will get $80m. That's the gulf."

Won't the richer get richer while the poorer... ?

That's the allegation, certainly. With the three most money-generating teams sat on the board and protected from relegation to the second division, won't the existing wealth gap simply widen? What have the smaller Test-playing nations got to aspire to?

Plenty, according to the the position paper: the argument hinges on self-sufficiency among all national cricket boards rather than reliance on centralised funding from the ICC. Financial independence, in other words, with all countries encouraged to find a way to stand on their own feet. The danger though, is that certain countries will play far fewer Tests.

As a result the paper calls for an end to an obligatory Future Tours Programme, ending "a large number of unviable matches". It also wants a Test Cricket Fund to be formed, with money to be directed to supporting the development of Test cricket in Sri Lanka, West Indies, New Zealand, Pakistan, Bangladesh and Zimbabwe.

"What's going to happen to those smaller countries?" ask Agnew. "What happens to those who aren't Test-playing countries, the associate members? Their funding has been slashed according to these plans and you need strong opposition for sport to thrive.

You bet. South Africa are the number one ranked Test team in the word but have been left off the top table in these proposals, with only occasional access to decision-making via a seat on the executive board on a rotating basis.

"The draft proposal is fundamentally flawed," Cricket South Africa president Chris Nenzani has said. "The proposal self-evidently is inextricably tied up with a fundamental restructuring of the ICC.

"We propose that the draft proposal be withdrawn immediately."

Others are unhappy too, including a sceptical Pakistan and a furious international players' union (Fica), whose executive chairman Paul Marsh said: "It is not in the best interests of the global game and we have real fears that it will only serve to strengthen the 'big three' countries while the rest are left to wither on the vine."

Agnew adds: "The other countries have been ambushed by this. England, India and Australia have gone away quietly over the last six months and come up with this scheme. There are so many things to worry about here and, frankly, I can't see an awful lot of good for Test cricket to come out of it."

What do those in favour of the changes say?

The F&CA, and the ICC, have made it plain that they will not be remarking publically on the proposals until discussions have been concluded in Dubai.

But some have come out cautiously in favour of the plans, with New Zealand Cricket director Martin Snedden suggesting: "There's nothing wrong with India, Australia and England working together to produce something for everyone. Don't jump to the conclusion what they're doing is not good for world cricket."

Agnew adds: "Sport is cyclical. Those teams at the top at the moment - England, India and Australia - they may not be in 10 years' time."

When will all this be decided?

The Dubai conference is under way. When might these significant, Test cricket-altering proposals be voted on? Potentially as soon as this week, so watch this space.