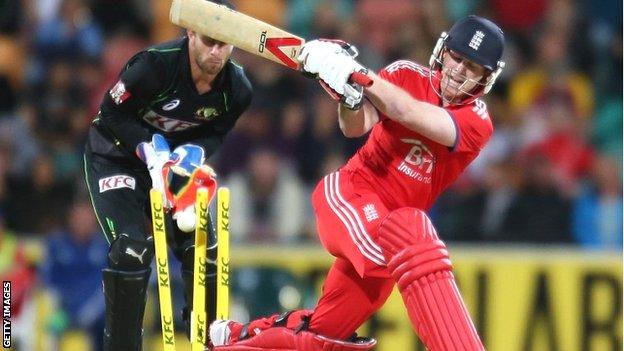 Australia beat England by 13 runs in Hobart in the first of the three-match Twenty20 international series.

"England's bowling meant Australia got away too easily. Finch and White set the platform and the Aussies were able to just keep going and going, and they did.

"It was always going to be a really tough chase from England, and to get 200 is still a really good effort from the visitors."

Needing to equal their highest ever T20 total to win, England soon lost three wickets for seven runs in 13 balls.

Ravi Bopara struck seven sixes in an unbeaten 65 from 27 balls, the fastest England T20 fifty, in their 200-9.

Bopara's thrilling innings was something of a microcosm of the one-day matches during England's difficult tour - plenty of promise but ultimately unable to avert defeat.

It was their 10th loss from 11 matches in all formats against the old enemy.

In an Australia side containing two debutants, only skipper George Bailey was part of the Ashes whitewash and just half a dozen featured in the one-day series which the hosts won 4-1.

The Hobart wicket was far from centrally positioned in the square, with one boundary at mid-wicket measuring only 57m, the distance a Finch defensive push might travel, not that there were many of those in evidence.

There were four sixes as 52 runs were scored in the six powerplay overs but shots came in all directions, Jade Dernbach's opening two overs going for 25.

Left-arm spinner Danny Briggs was thrust into the fray and conceded three fours in his opening over as Finch, who made a T20 world record 156 from 63 balls against England at Southampton last August, reached his fifty off 26 balls in the ninth over.

England captain Stuart Broad was by far the pick of the bowlers, conceding only two boundaries in maintaining an impressive line, and he made the breakthrough when Finch was caught in the deep.

White, dropped on 11 at slip by Joe Root in the third over, disdainfully launched Luke Wright's opening delivery into the construction site over the short boundary and added fours off the next two balls before he was trapped lbw by the Sussex all-rounder, whose one over cost 18.

Glenn Maxwell reverse-swept Briggs for four and then played the same shot for six off the next ball, while debutant Chris Lynn displayed some clean hitting down the ground and through the leg-side as Australia posted their fifth highest T20 total.

England, who had only made 200 on four previous occasions, lost Michael Lumb in the second over.

Alex Hales hit five fours in his 22 but wickets began to fall rapidly, key man Eoin Morgan out fourth ball playing an ungainly heave across the line at spinner Maxwell.

Jos Buttler and Root shared an enterprising 47 but both fell in the same over from Nathan Coulter-Nile, leaving Bopara with a requirement of 116 from 53 balls when he came to the crease at number seven.

The frequently-criticised Essex batsman played some astonishing shots and many were left in disbelief when a low full toss on off-stump landed on top of a tractor way over wide long-on with an apparently effortless turn of the wrists.

In his 27th T20 international, he reached his third fifty from only 23 balls and then hit three of the final five balls of the match for six.

But his heroics could not prevent another reverse and England will attempt to rectify matters in the second match, which takes place at Melbourne on Friday.