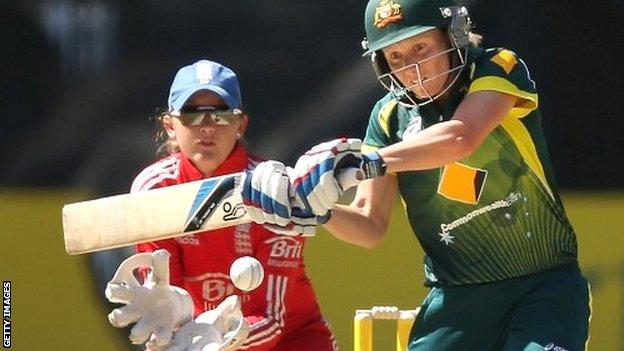 Australia coasted to a seven-wicket win against England in the second Twenty20 international in Melbourne, the penultimate match of the Women's Ashes.

With England Women having secured the Ashes in the previous match, defeat at the MCG reduced their lead to 10-6 in the points-based multi-format series.

England could only manage seven fours in their 98-6 after being asked to bat.

Meg Lanning hit five fours and a six in her 42 and Alyssa Healy an unbeaten 37 as Australia won with 29 balls left.

In only the fourth women's Twenty20 international at the legendary Melbourne Cricket Ground, vast acreage of the imposing 100,000 stadium was deserted as England batted first under clear skies, four injury absences from a squad of 15 affording little in the way of selectorial options.

Australia seamer Holly Ferling soon put them in trouble with 2-14 from three overs in an accurate new ball spell.

Dani Wyatt played onto her stumps in the first over and Ferling then claimed the key wicket of Sarah Taylor for eight with one that nipped back off the seam.

However, the 50 arrived in the ninth over and, with skipper Charlotte Edwards looking in assured touch, hope remained of a defendable total.

But wickets continued to fall regularly and when Edwards was smartly caught and bowled for 28 by spinner Erin Osborne above her head from the final ball of the 13th over, only one boundary was to follow as just 38 were added from the remaining 42 deliveries.

Australia found boundaries rather easier to come by, Elyse Villani with two in the second over and six recorded in the opening six powerplay overs.

Dani Hazell struck in the fifth over to remove Villani with one that turned a fraction, but Lanning immediately looked in commanding form, clipping her third delivery to the rope.

The 21-year-old acting captain struck the only six of the match with a delightfully timed short-arm jab down the ground off Natalie Sciver and played authentic strokes on both sides of the wicket.

Having survived on 23 when Sciver could not hold a difficult low chance diving forward at deep mid-wicket, Lanning's stylish innings was ended by a superb catch by Lydia Greenway running back and taking the ball over her right shoulder.

Jess Cameron edged onto her stumps to give Arran Brindle a second wicket in the same over, but Healy hit the winning run and Australia will attempt to at least claim the Twenty20 section of the tour when the series concludes in Sydney on Sunday.

"I thought the Aussies bowled really well but there was some poor shot selection, we never got going and for our young bowling attack 99 was not enough," Edwards said.

"It was difficult to manoeuvre the ball and the spinners got us behind the rate. We'll learn a lot from today; we haven't batted first for a long time knowing how to set a total."