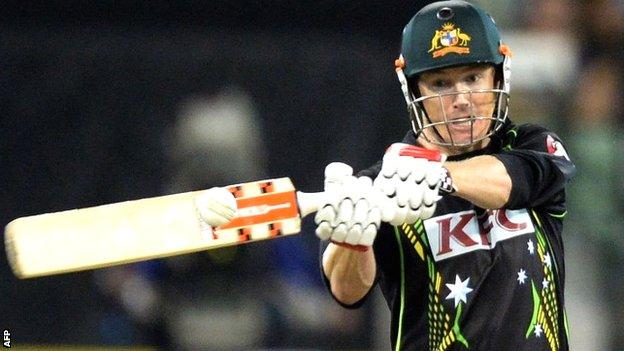 Australia added the Twenty20 series to their victories in the Ashes and one-day internationals as an eight-wicket win over England gave them a 2-0 lead.

England lost four wickets in as many overs early in their innings in Melbourne and only Jos Buttler (22) passed 20 in their mediocre 130-9.

What's been impressive has been the maturity from Australia - they haven't taken too many risks at any stage. England's openers contributed to their own downfalls, while the run-outs of Morgan and Root were the catalyst for the middle order disappearing. Cameron White came in and played some orthodox shots, while George Bailey totally took the initiative away from England. It's been lovely to watch, but not if you're an Englishman. They've been totally outplayed, they have to go and reassess the way they approach the game.

It was their 11th win out of 12 in all formats against England on the tour.

England followers grasping optimistically for a crumb of comfort from a wretched campaign will quickly have realised that few were on offer at the Melbourne Cricket Ground.

Instead it was 39-year-old Australian Brad Hodge who savoured the occasion before a crowd of 64,385.

In his first international appearance for almost six years, the highest overall run-scorer in the Twenty20 game took a stunning reflex catch to dismiss Luke Wright for a duck and then ran out Eoin Morgan with a direct hit.

The emphatic 78 run partnership in just 48 balls between White and Bailey meant Hodge was not required with the bat.

But three wickets fell in as many overs, and although Joe Root stroked three of his opening six deliveries to the boundary, he then committed the cardinal sin by running out the team's best batsman in the seventh over.

Morgan had outrageously reverse pulled his opening delivery for four but was adjudged to have failed to ground any part of his equipment when he slid in for a quick single as Hodge's throw from cover crashed into the stumps.

Root then compounded his error nine balls later when he ran himself out, pressing for a two and not getting very close.

Ravi Bopara had struck a stunning unbeaten 65 in a losing cause in the opening match on the small boundaries of Hobart on Wednesday, but with the shortest measuring 65m at the MCG he made only six singles before picking out deep mid-wicket.

And England's last remaining hope of a challenging total disappeared when Buttler, who had been becalmed with only two singles in 12 balls, was lbw in the 16th over.

Such a paltry total needed something inspirational with the ball but White dispatched three fours in the opening over from Broad and three more in five deliveries from Jade Dernbach as 48 came from the first 30 deliveries.

Tim Bresnan restored some order, the only bowler not to concede a boundary as just 11 runs came from his three overs, including the wicket of Aaron Finch lbw in the sixth over, although replays showed the ball would have passed over the stumps.

Dernbach's first two overs had gone for 24 and 18 came from his third, Bailey launching an imperious six deep into the crowd over the long-on fence.

The captain reached his second Twenty20 international half century from a mere 24 balls and victory was reached with three fours in four balls off the spin of James Tredwell, another to bear the brunt of the onslaught as his 23 deliveries leaked 36 runs.

England will attempt to avoid another whitewash when their tour concludes with the final T20 encounter in Sydney on Sunday.