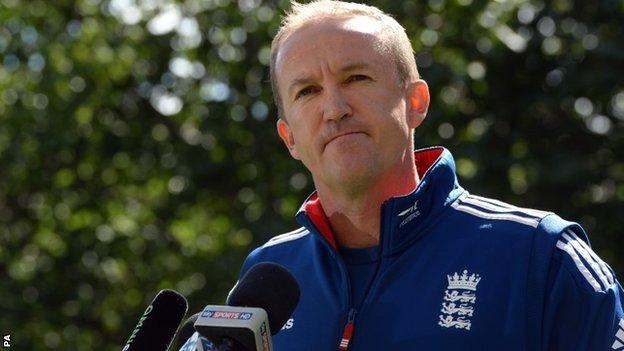 The 45-year-old Zimbabwean made the decision following talks with England and Wales Cricket Board (ECB) managing director Paul Downton on Thursday.

"For some time, this England team have carried an arrogant attitude. That's not necessarily Andy Flower's fault, but if you are looking for change then there were two major candidates - Flower and captain Alastair Cook.

"There are very few candidates to replace Cook. Matt Prior was left out for the final two Ashes Tests and Stuart Broad is too much of a loose cannon to be considered for the top job just yet.

"Therefore, when you are looking for change - and a simplification of an England set-up that has become bloated with various captains, coaches and backroom staff - Flower's departure and replacement with one man to oversee all teams seems a clear choice."

Flower, who oversaw three Ashes wins and the World Twenty20, is expected to take a coaching role with the academy.

England limited-overs coach Ashley Giles is favourite to take over, with a decision expected within two weeks.

In the meeting, Flower told Downton that one coach should be in charge of all three England teams.

Flower had enjoyed total control from his appointment in February 2009 until November 2012, when Giles took over the one-day and Twenty20 sides.

The job of technical director overseeing all England senior teams will now be advertised, with former spinner Giles - who will lead England on their limited-overs tour of West Indies in February and March - the front-runner.

Ex-Zimbabwe wicketkeeper/batsman Flower took over in difficult circumstances nearly four years ago after a rift between coach Peter Moores and then-captain Kevin Pietersen led to both leaving their jobs on the same day.

Having seen England bowled out for 51 in Jamaica in his first match, Flower then moulded his team into one of the most polished and professional units in international cricket.

After winning the Ashes back later that year, and retaining them in the 2010-11 series down under, he steered England to number one in the world Test rankings in August 2011 following a 4-0 home victory over India.

Flower also improved England's performances in the shorter forms of the game, coaching them to their first global limited-overs success at the 2010 Twenty20 World Cup, although the team slumped at the 2011 one-day World Cup.

After handing over one-day and Twenty20 duties to Giles, Flower remained in charge of the Test side, overseeing their first series win in India since 1984.

His team completed a third consecutive Ashes series victory with a 3-0 home win last summer but despite arriving down under as favourites this winter, they were heavily beaten in all five Tests and have now slipped to fourth in the Test rankings.

Following the final Test in Sydney, Flower said it was the "end of an era" for England.

He later denied issuing an ultimatum that he would leave unless Pietersen was dropped.

Flower had two stints as Zimbabwe captain during a decade-long international career in which he established himself as a world-class batsman and wicketkeeper, scoring 12 centuries, and averaging 51.54 in 63 Tests.

After quitting the international arena, Flower dedicated himself to county cricket and Essex, where he played for five seasons between 2002 and 2006.