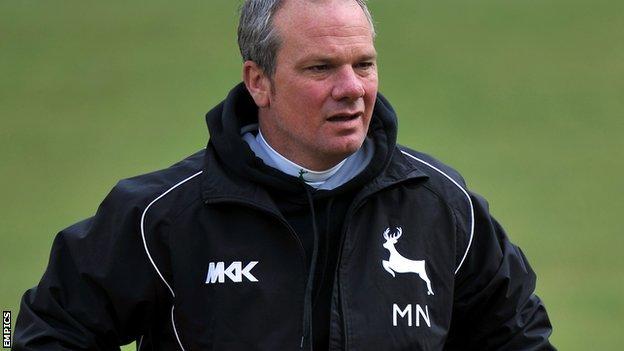 Nottinghamshire director of cricket Mick Newell says he would be keen on replacing Andy Flower as England coach.

Flower stood down from his role on Friday following England's 5-0 Ashes whitewash in Australia this winter.

Newell told BBC Radio Nottingham: "I would be interested to see what the position is going to be as and when it is advertised.

"I will take some interest in what happens with it over the next few days and weeks."

The 48-year-old is county cricket's longest-serving coach and has been director of cricket at Notts since 2002.

He has led the Trent Bridge-based side to County Championship titles in 2005 and 2010 and the one-day YB40 crown last season.

Newell, who was in 2012, has previously been involved in the England Lions coaching set-up.

The former opening batsmen was part of the coaching team for the Lions tour of West Indies in January 2011.

He is currently second favourite with the bookmakers to succeed Flower, behind current one-day coach Ashley Giles.

"We don't quite know what the job is going to be at the moment while the role is assessed," Newell added.

"If you are an English coach, you want to work with the best players and that includes working at international level.

"Any coach in county cricket will want an opportunity to work with the best players on the international scene and I'm no different.

"My style is management as much as coaching and that seems to be the way England have run things in recent years.

"I would like to think I can do it in the future at England level."