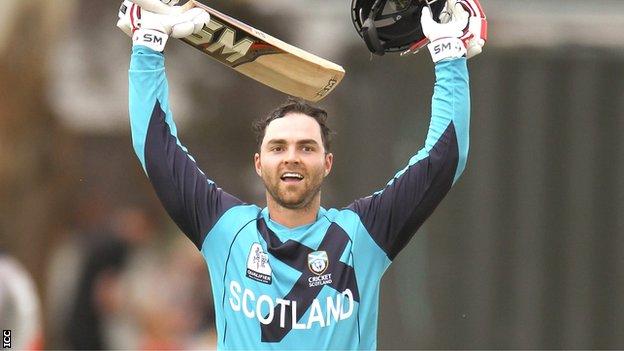 Skipper Preston Mommsen hit an unbeaten 139 as his team posted 285-5 in the final against the United Arab Emirates.

Scotland's triumph gives them a place in Group A for the World Cup alongside co-hosts Australia and New Zealand, England, Bangladesh and Sri Lanka.

The UAE will be placed in Pool B along with defending champions India, Pakistan, South Africa, West Indies, Ireland and Zimbabwe.

Both teams had already booked their places at the tournament by finishing in the top two places in the Super Six stage.

Scotland, coached by former England all-rounder Paul Collingwood and Craig Wright, will be making their third appearance at the World Cup, where they have never previously gone beyond the first round.

They last competed in the tournament in 2007, having won the 2005 qualifying event.

Their first match in the 2015 competition will be against New Zealand in Dunedin on 17 February, before they take on England in Christchurch on 23 February.

Their first four group matches are all in New Zealand, with the last two in Hobart, Tasmania.

In Saturday's qualifying final in Lincoln, the Scots lost three wickets for 37 runs in the first seven overs before man-of-the-match Mommsen struck 12 fours and a six in his 149-ball innings.

Richie Berrington added his second half-century of the tournament (63) in a stand of 138 for the fifth wicket, while Freddie Coleman (31) and Matt Machan (22) also made useful contributions with the bat.

The UAE's run-chase was anchored by Patil, who narrowly missed out on a century when he could only score a single off the last delivery of the match.

Top-order batsmen Amjad Ali and captain Khurram Khan added 34 runs each, however, once the skipper was dismissed in the 25th over, the UAE was not able to create any meaningful partnerships.

Netherlands, Kenya and Canada lost their one-day international status as a consequence of the qualifying tournament, replaced by the UAE, Hong Kong and Papua New Guinea, who will join Ireland, Afghanistan and Scotland as the ODI associate nations for the next four years.

Asked about playing in Group A in next year's World Cup, Mommsen said: "We're going to play some of the best teams in the world. But there will also be opportunities to hopefully get some wins, and cause a couple of upsets.

"It's an awesome prospect. Obviously England will be huge for us. We'll be looking to cause an upset - it's happened before at World Cups and there's no reason it can't happen again next year.

"It's always a big rivalry with the English. We've got them in May up in Aberdeen, and that'll be a good little test."