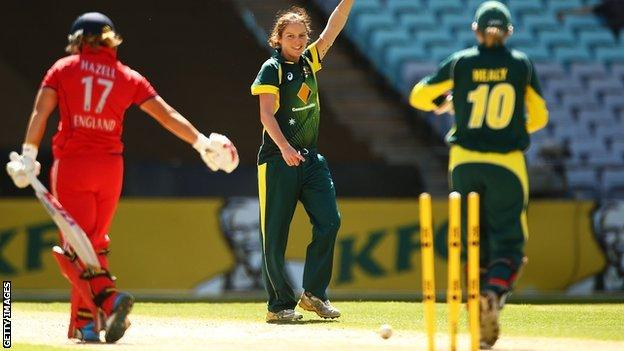 Australia were untroubled in the chase, Elyse Villani's unbeaten 36 getting them home with nine balls to spare.

England had already won the Ashes on the multi-format points system, but end with three wins and four defeats.

Their defence of the trophy they won at home last summer was given the best possible start by a 61-run win in the Test match - the six points earned meaning only two victories were needed from the three one-day internationals and three T20s.

They came in the first ODI and first T20 but, since then, the touring batters have failed twice to give Australia two consolation wins.

At Stadium Australia, the top order was ripped up by Farrell, who removed Lauren Winfield, captain Charlotte Edwards - via an excellent catch by Nicole Bolton - and Lydia Greenway for a golden duck.

From 15-3, much seemed to rest on Sarah Taylor and for a while her steady accumulation looked likely to begin an England fightback.

But, perhaps undone by one that stuck in the pitch, Taylor holed out to long-on off Megan Schutt for 22, beginning another collapse that saw four wickets fall for 30 runs.

In that time, some panicked running saw Nat Sciver, who top-scored with 28, run out in a mix-up with Danielle Wyatt, who herself was then found short by Meg Lanning's direct hit.

"England's change bowling needs some work, especially when it's going to be integral at the World Twenty20 in Bangladesh on slower decks. Take out Shrubsole and Brunt, and you're not left with a great deal. Georgia Elwiss has looked better on slower decks, but I don't think Charlotte Edwards uses herself enough. Danielle Hazell is their main spinner, but at this moment in time, I'd rather see Charlotte Edwards bowling than Danni Wyatt. Sarah Taylor also needs to push on - she's getting into good positions but not going on, and she's an elite batter."

In the end, it took a late effort from Danielle Hazell and Jenny Gunn to set Australia 102, a target made slightly trickier by the slow conditions and paceless outfield.

And, with off-spinner Hazell conceding only nine runs from four overs with new ball, England had control from one end.

But, with the seam of Kate Cross and Gunn expensive, openers Alyssa Healy and Villani were able to compile a stand of 48.

When Healy heaved Arran Brindle to Greenway on the leg side, Lanning arrived to continue Australia's progress, only for the captain to needlessly pull Georgia Elwiss to deep square leg.

However, Villani remained and, though some late pressure forced the run-out of Bolton, Alex Blackwell's busy entry proved that England had fallen short.

Still, England were able to celebrate with the Ashes trophy in the Sydney evening sunshine, but improvement is needed in the shortest format before the World Twenty20 in Bangladesh in March.