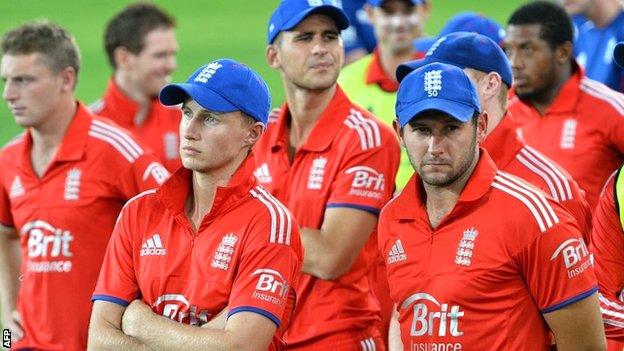 England's tour of Australia finished in yet another abject defeat as Australia sealed a 3-0 Twenty20 series whitewash with a crushing 84-run win in Sydney.

Australia skipper George Bailey smashed three sixes in his 49 off 20 balls, taking 26 off the final over from Jade Dernbach as his team posted 195-6.

Their tour record against Australia finished: played 13, lost 12, won one.

There have been many dismal moments for England down under but on day 104 there were new depths to descend to, with certainly no British medal-winning performances at the well-populated Olympic Stadium, staging an international for only the third time.

As has so often been the case, it was not disastrous throughout, with only 24 coming in the first four overs from Stuart Broad and T20 debutant Chris Jordan after Bailey chose to bat.

But Aaron Finch was dropped on eight by Jordan off Tim Bresnan and swiftly swished three sixes, Ben Stokes conceding 23 from his opening two overs in his first appearance of the series.

Ben Cutting, in only his third T20 international, demonstrated that he was another Australia batsman capable of authentic, powerful strokeplay to all parts of the ground and Stokes was dispatched for two more sixes when he returned for a third over.

What a complete mockery this is. I feel sorry for the fans, as everyone wanted to see some competitive cricket. England are in disarray. Should they put this tour to the back of their minds, or break down exactly what went wrong?

Joe Root, the only spin option, ended a partnership of 53 in five overs with a superb one handed return catch to dismiss Cutting for 29.

Jordan had Cameron White caught down the leg-side in the following over, and in the next, Broad struck twice, including the wicket of Twenty20 cricket's highest run-scorer Brad Hodge, the 39-year-old top-edging to fine-leg.

But Wade was dropped by Ravi Bopara on four and he proceeded to add 56 from the final four overs with Bailey.

It was the astute captain who caused the most disruption, however, destroying Dernbach with some inspired, inventive hitting.

The much-maligned seamer's first three overs in the middle of the innings had gone for a respectable 23 runs but Bailey picked all of his variations and found the gaps in the field.

Piercing the field was not always necessary, a slower ball bouncer swotted in tennis forearm fashion over long-off and the next ball launched over long-on to take the total number of maximums to 13 in the innings, and Dernbach's figures for the series to 1-141 from 11 overs.

In contrast, England's batsmen managed to find the fielders with unerring regularity, losing 3-14 in 14 deliveries to leave Morgan with a requirement of 171 from 15 overs when he came to the crease at number five.

The left-hander played an impish flicked sweep off the medium pace of Dan Christian to bring up the 50 in the eighth over, but wickets continued to fall and in the 13th over he was the sixth man to depart when Mitchell Starc took a fine low catch rushing in from deep mid-wicket.

Bopara's dismissal rather summed things up, a huge swipe thudding into his pad and the ball trickling into the stumps to remove one bail, and perhaps inevitably the tour finished with a farcical run out after a mid-pitch mix-up.

Had the international matches been played under the points system used in the Women's Ashes, Australia's winning margin would have been 44-2.