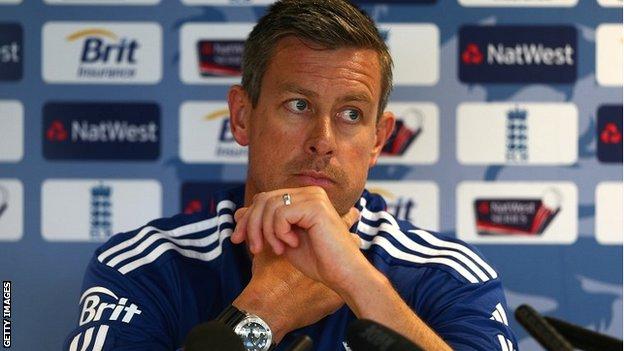 Test coach Flower stood down on Friday in the wake of the 5-0 Ashes series defeat, and Test and one-day leadership will now be combined again in one post.

Giles, who was made limited-overs coach in 2012, saw his team lose the one-day and Twenty20 series down under.

Flower, who became England coach in 2009, divided coaching duties with Giles in 2012 and focused on the Test side.

On Friday, England and Wales Cricket Board (ECB) chairman Giles Clarke said Flower left his position because of a desire to revert to having a single coach for England's Test, ODI and T20 sides.

He also described Giles as a "strong candidate" but stressed others would be considered.

On Sunday, England's woeful tour of Australia concluded with an 84-run defeat in the final Twenty20 international in Sydney.

It completed a 3-0 whitewash in the T20 series to follow the Ashes whitewash and the 4-1 defeat in the one-day international series.

"We've let ourselves down with the basics really - our skills haven't been good enough," Giles told BBC Sport.

"At times confidence has taken a hit over this winter but ultimately Australia have out-bowled us, out-batted us and out-fielded us and we've got a lot of work to do."

England's next tour begins in little more than three weeks in the Caribbean and comprises three ODIs and three T20s against West Indies.

Australia won by one wicket

The team then move on to Bangladesh where the ICC World Twenty20 takes place from 16 March-6 April.

"We need to get confidence back up, but most of these guys just need two weeks away from the game," Giles added.

Asked about Flower's decision to step down, he said: "I had enough on my plate here so it was a bit of a shock. At the moment I've got enough to focus on with the West Indies coming up and the World Cup before I think about anything else.

"I was very proud and privileged to play for England, I've enjoyed my time coaching the one-day side and I would love to do the whole thing. You can really get your teeth into it, get the right culture and disciplines in place, and I think I'll be throwing my hat into the ring.

"There will be other guys out there who are interested. It's one of the biggest jobs in cricket and I need to make sure I'm at the front of the list.

"It is a big commitment but I'm a believer, as Andy was, that one person should do everything. It would be easier for the captains and the players as well to get one message."

On the possible selection of Kevin Pietersen - one of the players rested for the one-day matches in Australia - Giles added: "We've got to pick the squad [to face West Indies] this week so I can't answer that.

"No-one is guaranteed a place on that plane - we've got some tough decisions to make."