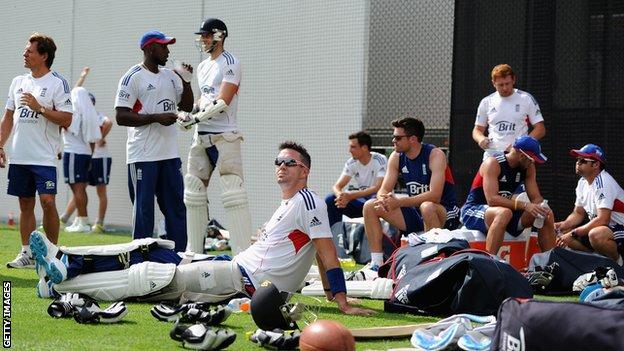 The people who have been closely involved with the Kevin Pietersen story recognised it was always destined to finish in a dramatic parting of the ways.

It has always ended like that, wherever he has been.

But if England have failed in their attempts to manage him, then so has everyone else.

At least the decision not to pick him again was unanimous and made by those at the England and Wales Cricket Board who know what really went on.

It has been made by people within the dressing room, not by journalists or supporters.

Players have said various things off the record about Pietersen and his behaviour, but when a camera or dictaphone is put in front of them they will tell you what a great lad he is.

On the field of play, he may have been England's leading run scorer in the 5-0 Ashes whitewash in Australia, but he dug deep and fought only once, when he scored 71 and 49 at Melbourne.

If he had averaged 40 and been caught behind every time, then he may have survived. However, the way he got out in the first three Tests in Brisbane, Adelaide and Perth will have played a big part in the decision taken by the ECB.

Pietersen has always batted however he feels on a particular day, but if he could not get his head down and play for the team when they were up against it, could he ever do so?

His international career could easily have ended 18 months ago when he sent text messages to the South Africa dressing room, undermining then captain Andrew Strauss. That was shameful - and Pietersen knew it.

The ECB did all it could to bring him back on board, but when you have been so completely and utterly dismantled, as England have been this winter, you have to draw a line.

Nov 2004: Makes England one-day debut, scoring 27 not out against Zimbabwe

Sept 2005: Scores 158 on the final day of the Ashes series as England win urn for first time in 18 years

Jan 2009: Resigns as England captain following a rift with coach Peter Moores, who is sacked

May 2010: Scores 248 runs and is named player of the tournament as England win the World T20 in West Indies

Jan 2011: Part of England team that wins a Test series in Australia for first time since 1987

Aug 2012: Dropped for third Test against South Africa for sending "provocative texts" to opposition players, days after scoring a brilliant century at Headingley

Oct 2012: Agrees to be "reintegrated" into England team after signing new ECB contract. Recalled for India tour and scores 186 in Mumbai in 2-1 series win

Jan 2014: Part of England team that suffers 5-0 whitewash in Australia

England's new managing director, Paul Downton, says he wants to "rebuild not only the team, but also the team ethic and philosophy". And he is exactly right.

Teams sometimes get too settled, get stuck in their ways and lose sight of what they are there to do.

It is not about being the greatest team in the world ever, it is about fighting for every run and wicket. That is what you have to get back to.

England need players like Durham's Ben Stokes, who is young, hungry and ambitious. They must work really hard to build up a team again, especially after team director Andy Flower's resignation last week.

Only those close to the team can decide whether Pietersen would have bought into that - and they clearly thought he would not.

The England management could have told him he would not feature in the limited-overs tour of the West Indies and the World Twenty20 in Bangladesh that follows, but that if he got his head down and scored some runs in county cricket then the route back was possible. That would have placed the emphasis on him.

If he wanted to reach that 10,000-Test run landmark that he talked about and if he wanted to work under a new coach, that would have been in his power. That was the option I thought the ECB would take.

I will remember Pietersen as possibly the most entertaining, brilliant and unorthodox batsman I have ever seen.

Some of the shots he played were things that not even West Indies great Viv Richards - my idol growing up - would have played.

It is very easy to say that Pietersen has not fulfilled his potential - he averaged less than 50 in Test cricket and missed out on the 10,000 Test runs he should have scored - but much of the disappointment that people feel towards him is similar to the way people felt about David Gower.

People would complain about Gower playing another loose shot outside off stump, but often that was because they had wanted to watch him at the crease for a little longer.

It is a shame we will never see Pietersen in England colours again.