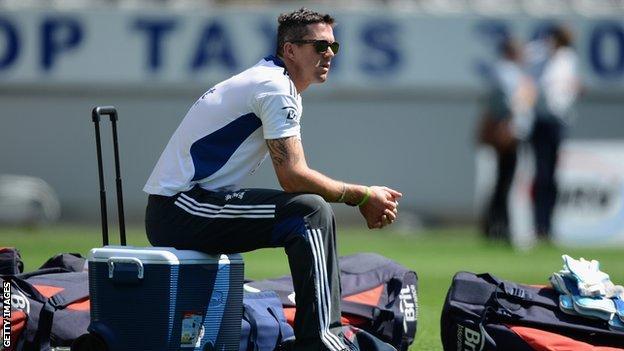 And so the Ashes tour which could get no worse keeps getting worse. Even when it's over.

Few nations do sporting meltdowns better than England. With the announcement on Tuesday evening that Kevin Pietersen's international career has been summarily ended at 33, an age when his former batting coach Graham Gooch would still have 14 more Test centuries in him, we are now amid one of the stone-cold classics.

Forget the mere 5-0 Test scoreline, the daily humiliations at the dynamite hands of Mitchell Johnson, the 4-1 one-day embarrassment or the 3-0 Twenty20 mauling.

The tour down under has now cost England three of their most senior players in Pietersen, Jonathan Trott and Graeme Swann as well as the coach, Andy Flower, who took them to number one in the world. Spineless in defeat, they have now lost their backbone.

A few weeks ago, the big decision was supposed to be whether it was Flower or Pietersen who would go. Now, just as when Pietersen lost the England captaincy in a dispute with previous coach Peter Moores, both kingpin and coach have toppled.

Humiliating series defeats inevitably lead to blame and bloodletting. In dispensing with their most controversial player, England's management are trying to draw a line in the sand. They may instead have dug themselves a trench.

"It's one of the most disgraceful decisions in the history of modern English sport.

"He appears to be the sacrificial lamb so that others in English cricket can save their face.

"What you have now is a collection of people at the ECB who literally have no clue about man management.

"In KP, you have a maverick player, not the easiest to manage, but then none of the best players are. You need someone who knows how to manage a genius.

"What we are seeing is a debacle of management on an epic scale.

"I can tell from the reaction on social media that 95% of the English public are absolutely enraged by this.

"All of the best players of the last 25 years have all been difficult. Ian Botham, Freddie Flintoff, David Gower, and have all taken great captains to draw the best out of them.

"We have a useless captain, no coach and an ECB management team who have committed professional suicide."

Pietersen has always had the contradictory air of permanent impermanence in the England set-up. He looked different to those around him, played shots no-one else ever had. With his deeds on the pitch and demands off it, he was a man apart.

In Australia, the split was given physical form in the positions where he was sent to field: lonely mid on, distant third man, isolated long on. It was as if captain Alastair Cook could not put enough distance between the pair.

His dismissals, frequently, were wanton, springing traps that owed nothing to subtlety and everything to his inability to appear affected by any bowler or captain.

Come into my web, said the spider to the fly. Why not, replied KP, in Brisbane (caught hooking, long leg), Adelaide (caught driving, short midwicket) and Perth (caught slogging, long on).

He has more Test appearances than Wally Hammond, Ted Dexter and Peter May, a higher Test average than David Gower, Geoff Boycott and Colin Cowdrey, and more Test centuries than Len Hutton and Ken Barrington.

Have England got the absolute maximum out of such a special talent? Do they have anyone who can come close to replacing his weight of runs and speed at which he made them?

Why dispense with him now, rather than during the texting scandal of 18 months ago? Was Pietersen's character more malignant in 2014 than when England were beating India away, New Zealand at home and then winning the Ashes 3-0 at home?

"If I had to think about it I would have expected him not to be picked.

"Some of those shots in Australia were mind-boggling. We all remember the wonderful innings, but what about the daft things and the stupid shots?

"You can be an individual within the team but you cannot just be an individual. He has said this is how I play - take it or leave it. Well, England have taken it for long enough and know they've said 'thank you very much, we will leave it'."

There is yet to be a full review of the blunders down under. Is KP, England's top run scorer in the series, the player who should take the fall for everything that went so catastrophically wrong?

Flower's replacement has yet to be interviewed, let alone named. What if the new head coach wanted Pietersen in his side, if he felt he could get the best out of such a unique cricketing commodity?

KP at the crease was often judged by harsher criteria than more prosaic team-mates. He was capable of so much that an injudicious dismissal felt that much more wasteful.

But his own standards have unarguably slipped over the past 12 months. He may have been England's leading batsman in Australia, but that equated to a less than stellar 294 runs at an average of 29.

His last 48 Test innings brought just four centuries. Ten other England players have better one-day batting averages than him in the past year, including Samit Patel and James Anderson.

Neither was Pietersen showing any sign of adapting batting strategy to the stresses of advancing years, the weakening of joints, the minute loss of strength in limb or clarity in eyesight.

The greats of his era - Tendulkar, Ponting, Lara, Ganguly, Kallis - adjusted their shot selection to reflect the waning gifts at their disposal. Instead Pietersen, after his ghastly dismissal in the third Test as England tried to salvage a draw, would be utterly unrepentant.

Pietersen was England's leading run scorer with 294 at an average of 29.40. Here are his scores in the five Tests:

"I won't change the way I play for anybody because I think I've been pretty successful," he told BBC Sport. "It's not a case of can't. It's just there's something in me that says if there's a ball to hit then you've got to hit it. And it works."

Wherever Pietersen has played cricket, rumours of dressing-room unrest have followed. To leave one state side can be considered ambitious. To leave your next county with your kit being thrown off the balcony, and then to play only intermittently for your next suggests either unusual bad luck or an uncommon temperament.

Whoever his captain with England, the impression has been the same: like his stylistic opposite, Geoff Boycott, a player endured by his team-mates for what he brings on the pitch rather than ever being one of the boys, a self-obsessed essential in a team sport that is decided by individual confrontations.

In that way he was never going to leave quietly, even if the official statement attempts to make it look that way and inadvertently does exactly the opposite.

"Everyone was aware that there was a need to begin the long-term planning after the Australia tour," ECB managing director Paul Downton said. "Therefore we have decided the time is right to look to the future and start to rebuild not only the team but also team ethic and philosophy."

The logic in the timing of this decision is as mercantile as it is moral. With the Indian Premier League auction next week, Pietersen and his agent wanted to be able to tell prospective suitors how much time he could spend in any fresh marital bed.

It does not mean that many England supporters will not be saddened to see him go.

Pietersen's reputation away from the crease and unusual route into the national team meant for some that he was more appreciated than adored, a show-stopper but not their leading man.

But even if you felt there was something faintly ridiculous about his preening, you still wanted to see him bat more than any other Englishman of his era. Not since Ian Botham had anyone dominated attacks in such swashbuckling fashion. Not since David Gower had anyone done it in such singular style.

"It's not easy being me in that dressing room," he famously complained at Headingley in the summer of 2012, just before news broke of his indiscretions with the enemy team.

It wasn't easy for the others either. And that, ultimately, is what has brought his unforgettable international career to a premature end.