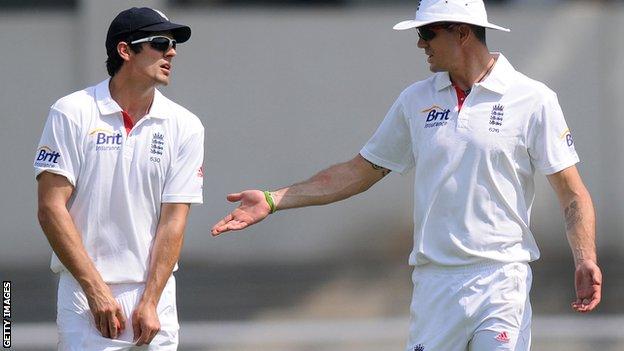 Cook was part of a three-man panel who met the batsman on Monday and told him of their decision.

Although some members of the England dressing room have no issues with Pietersen, the BBC has learned that Cook felt the 33-year-old's departure was in the best interests of the team.

"Pietersen has always had the contradictory air of permanent impermanence in the England set-up. He looked different to those around him, played shots no-one else ever had. With his deeds on the pitch and demands off it, he was a man apart."

Cook, who succeeded Andrew Strauss as captain in August 2012, brought Pietersen back into the England fold after he had been dropped for sending provocative text messages to South Africa players.

But following England's disastrous 5-0 Ashes whitewash in Australia, during which Pietersen was criticised for repeatedly falling to reckless shots, the captain wants to mould a new team with a new culture for the next five years.

Pietersen was summoned to a meeting on Monday with Cook, new England and Wales Cricket Board managing director Paul Downton and chairman of selectors James Whitaker at the Danubius Hotel near Lord's.

That was followed on Tuesday by a separate meeting involving Pietersen's agent Adam Wheatley, Professional Cricketers' Association chief executive Angus Porter and Downton to discuss the severance terms of his 12-month central contract that was signed in October.

On Tuesday evening, the ECB sent out an official press release in which Downton, who had the final say on Pietersen's departure, stated: "The time is right to rebuild not only the team but also the team ethic."

Pietersen, meanwhile, feels he was not given a clear explanation for his sacking despite asking Downton and Whittaker for justification during the brief meeting.

BBC Sport has been told that he is angered by stories of stand-up arguments with Cook and rumours of his alienation from the team.

He admits to occasionally turning up late for meetings and feeling frustrated by England's overly analytical approach, but points to his support for younger players and work with tail-end batsmen as examples of his commitment to the cause.

Although there is no written condition that Pietersen will never be allowed to play for England again, it is believed to be highly unlikely that he could ever be recalled.

Indeed, whoever is chosen to replace Andy Flower as England team director is likely to be informed that the South Africa-born batsman is not available for selection.

The decision to jettison England's highest international run-scorer has been questioned by former captain Michael Vaughan.

Vaughan, who captained Pietersen in the 2005 Ashes success, wants the ECB to explain their decision.

"I really do think the ECB and the people involved have to give us the reason exactly why they got rid of Kevin Pietersen," he told BBC Radio 5 live.

"You hear of rumours that he's been a nuisance around the dressing room but it was only last week that Graeme Swann, who's been in that dressing room for the last few years with Kevin Pietersen, said 'yep, in 2012 and the South Africa series, the textgate story, he was a problem, but once they reintegrated him he's been fine, he's had a great attitude'.

"Then England get rid of him on apparently cricketing reasons and that's the guy that scored more runs than anybody else in the Ashes series. It's a sad day for cricket."

Vaughan believes that Flower's replacement should have been the one to make the decision about Pietersen and that the batsman has been punished for speaking his mind in team meetings.

"A new director of cricket will be appointed in April and won't have the opportunity to pick a star player," he added. "They should be making those decisions on their own.

"Kevin will speak his mind. If there's an issue within the side he will go straight to the coach and say these are the things we need to sort out and maybe Andy Flower didn't like what KP was saying and that's why they've got rid of him."

However, another former England great Geoffrey Boycott does not agree and believes Pietersen's batting at times set a bad example to his younger team-mates.

"We all remember his wonderful innings, but what about the daft things and the stupid shots?" he said.

"That has an effect on the dressing room and young players. How do you tell young players to play responsibly? It stops you from building discipline.

"You can be an individual within the team but you cannot just be an individual. He has said this is how I play, take it or leave it. Well they've taken it for long enough and now they've said thank you very much, we will leave it."