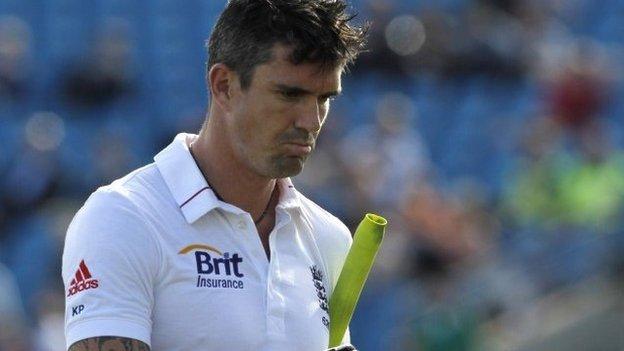 If Kevin Pietersen's England career was loud, brash and over-the-top, the manner of his departure was exactly the opposite.

Ten years of soaring highs and plummeting lows were brought to an abrupt end by a bland and unsatisfactory statement from the England & Wales Cricket Board, with vague allusions to a "team ethic" and the need to bring "clarity for the future".

Just as with the departure of team director Andy Flower the preceding week, there was no news conference and therefore no chance to ask legitimate questions about the reasons behind the decision to jettison such an outstanding talent.

Instead we are left with rumour and conjecture, claim and counter-claim that leaves cricket followers scratching their heads.

Here are the questions that remain unanswered:

Why did Pietersen have to go?

When Pietersen was dropped in 2012, his offence was clear. In sending provocative text messages to opposition players, Pietersen had crossed a line and was disciplined accordingly.

This time the waters are far muddier. Pietersen's reckless shot selection in Australia clearly irritated his coach and captain, but no-one has actually come out and explained what it is that makes him so unmanageable.

Rumours of a stand-up row with captain Alastair Cook in Sydney have been angrily denied by the Pietersen camp, as have claims that he was not supportive of his team-mates.

Pietersen was, apparently, sometimes late for team meetings and didn't always toe the party line - but that hardly seems grounds for dismissal.

The ECB statement talks about rebuilding the "team philosophy", but nobody is offering a coherent argument to explain why a captain who made such a push for Pietersen to be reintegrated into the side in 2012 has now helped decide the team would be better off without him.

Was he friendless in the dressing-room?

"Kevin has had his moments in the past where he certainly has been divisive in the dressing-room, but to be fair to Kev, since coming back from his 'reintegration' he has been much improved" - Graeme Swann, 27 January

The ECB has talked about rebuilding the "team ethic" without Pietersen, but just how divided was the dressing-room during the Ashes tour and how far was the 33-year-old responsible for any ill-feeling?

Several pundits have pointed at Pietersen's standard fielding position at fine leg during the series to suggest a disconnect with his team-mates, but he was stationed there because of his knee problems.

Following his retirement, Swann told BBC Sport that rumours of rifts were "a made-up pack of lies" and suggested Pietersen's behaviour had improved since 'textgate'.

What changed so drastically during the final two Tests for things to reach a point where Cook wanted Pietersen out?

Did Andy Flower or Ashley Giles have an input?

"There was no discussion about leaving Kevin out. He's another million-pound asset at least, he might be worth a bit more than that. Kev has been a fantastic player for England for many years" - Ashley Giles, 15 January

The ECB described Pietersen's departure as the "unanimous decision" of the England management, including the selectors. This raises several interesting questions.

Did Flower, who remains a selector but no longer the coach, have a hand on the hammer that drove the final nail into the coffin of a player he clearly disliked?

Did Giles, England's limited-overs coach and the favourite for the permanent job, consent to Pietersen's departure and thereby reduce his chances of winning the WorldTwenty20 in Bangladesh?

Less than three weeks earlier, Giles described Pietersen as a "million-pound asset" and made it clear the controversial star did feature in his plans.

What if the new coach wants Pietersen in his team?

"It's a very strange decision for England to make now. A new director of cricket will be appointed in April and won't have the opportunity to pick a star player. They should be making those decisions on their own" - former England captain Michael Vaughan

"Pietersen has always had the contradictory air of permanent impermanence in the England set-up. With his deeds on the pitch and demands off it, he was a man apart."

The ECB have promised to scour the globe to find the best possible candidate to rebuild the wreckage of the Ashes series and put the team back on the right track for the World Cup and Ashes series in 2015.

Several of the front-runners - including Pietersen's mentor Graham Ford - are known admirers of the batsman and would surely want to start with a clean slate and pick the best possible England side.

Although the ECB statement did not categorically shut the door on a Pietersen return, BBC Sport understands that the new coach will be told that the Surrey batsman is unavailable for selection.

Was Pietersen the only player causing trouble?

"If that situation arose another 100 times, I would phone Kev another 100 times. It wasn't done for any other reason than that I saw a team-mate struggling and, as far as I'm concerned, that becomes the responsibility of the players" - Matt Prior, December 2012

"If England have failed in their attempts to manage him, then so has everyone else."

Broadcaster Piers Morgan, a strong supporter of Pietersen, has alleged that wicket-keeper Matt Prior tried to instigate a dressing-room mutiny against Flower during the Melbourne Test.

Morgan told his 3.95m Twitter followers that Prior called Flower a "headmaster" and urged the players to take possession of the team.

In response, Prior accused Morgan of an "attempt to knock someone who has only ever had the team's best interests at heart".

Was there a growing movement against Flower, and if so, will the coach's departure help harmonise the team?

Is the cull over?

For a variety of reasons, England's Ashes tour has accounted for Jonathan Trott - who left Australia because of a long-standing stress-related illness - Swann, Flower and now Pietersen.

If the ECB really is committed to "looking to the future", as their statement declared, will more players have to go?

Prior, James Anderson and Monty Panesar are all the wrong side of 30 and have been some way off their top form. Clarity over their futures would surely be of benefit as the team looks to move on.

Who will replace Kevin Pietersen?

The need to manage Pietersen's workload has restricted him to just nine one-day international and one Twenty20 appearance since February 2012, so it is in the England Test team that he leaves the biggest void.

With opener Michael Carberry unlikely to keep his place and no timescale yet put on Trott's recovery, suddenly England are looking for three new batsmen in their top six.

Eoin Morgan, Gary Ballance and James Taylor will all be pushing for selection, but not for many years has the England team looked more open or exposed.