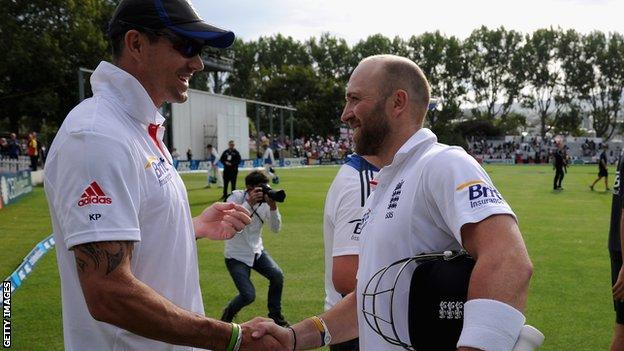 TV personality Morgan said on Twitter that wicketkeeper Prior told team-mates Flower was "behaving like a headmaster" and creating "a schoolboy environment".

Morgan claimed Prior made his comments after the fourth Test in Melbourne, having been dropped for that match.

Prior also sat out the fifth Test in Sydney, when to lose the series 5-0, Flower's last Test in charge.

"I refuse to be attacked by a bloke that knows very little about what goes on in the England setup apart from rumour, gossip and hearsay from certain individuals," wrote Prior.

"Maybe I was recorded or 'hacked' but if not I'd like to see where these words I apparently said have come from?

"I'm not the kind of person to divulge what is said in team meetings but all I will say is that Flower, Cook and the rest of my team-mates know exactly what I said and the way in which it was meant!"

He added that Morgan's comments were "just an attempt to knock someone who has only ever had the team's best interests at heart" and insisted he had "tried my best on and off the field to help the England cricket team".

After his initial comments, Morgan, a friend of axed England batsman Kevin Pietersen, added: "If you didn't say it @MattPrior13 - then sue me. That should clear things up."

The news has divided opinion amongst past and present players, as well as fans.

The former England opener and captain added he was not consulted on the decision but understood the move.

"I've not been party to any meetings or decisions of chatting to anyone," he told BBC Sport. "When I saw the news I was as surprised as anyone.

"Kevin's done great things for England in the past but they want to make a fresh start. The team after Australia needed to be rebuilt and they are looking to start that now.

"Kevin plays box-office innings. He can be a match-winning player and if you look at his career down the last decade he can play many innings like that.

"But England cricket wants to move forward and everyone has to respect that."

Despite the fallout from England's Ashes tour, Gooch has backed captain Cook to remain in the job.

"Everyone involved in the trip - coaches, management, players - needs to take responsibility right now," he added.

"I have spoken to Alastair. He's a proud man, he's been a wonderful player for England. He's been a role model and he's very disappointed - more than disappointed, he's hurting bad.

"After a trip like that, everyone is questioning everyone's position and quite rightly. But Alastair is strong enough in mind to improve after that and I think he should remain as captain."