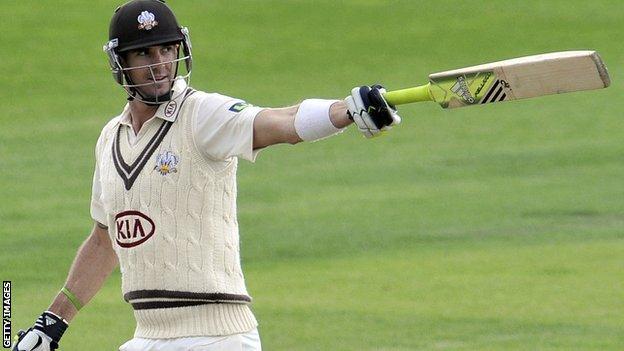 Surrey are confident that discarded England batsman Kevin Pietersen will sign a new contract at The Oval.

The county will open negotiations with the 33-year-old once a severance package with the England and Wales Cricket Board is agreed.

Surrey believe Pietersen is happy at The Oval and that they can offer a competitive deal while still remaining within the £2m salary cap for counties.

It is not yet known which formats of the game the deal will include.

"If you think how long the IPL has run so far, Kevin Pietersen hasn't played a great deal and - even though he might be thinking it inwards - he hasn't put his IPL commitments before he has put his Test match commitments. He's always come back and played for England.

"We are going to see Kevin Pietersen probably make more money now than he's ever made in the last two or three years because of what he can get out of the IPL.

"The sad case of affairs is, I think he would give that all up to play for England for another two or three years."

Pietersen was told by the ECB on Monday that he is no longer part of the national team's plans.

Now, he could opt to become a freelance Twenty20 cricketer, playing only the shortest form for Surrey and in other leagues around the world.

On Wednesday, Indian Premier League (IPL) founder Lalit Modi said that Pietersen could be worth as much as £3m in this year's auction.

"Every IPL team owner's dream was to get Kevin Pietersen playing full-time, to be available for the whole season, but he had to make time for the national team, rightly so.

"But now that he will be available for the whole time, I think it will be England's loss and the IPL's gain."

With the IPL usually held in April and May, and the new T20 Blast county compeition taking place in the English summer, Pietersen could also feature in Australia's Big Bash League or the Ram Slam T20 in his native South Africa, which are both played in the English winter.

Pietersen joined Surrey from Hampshire for the start of the 2011 season after a loan spell the previous summer, saying he wanted to play for a London team because he lives in the capital.

In December 2011, the former Nottinghamshire right-hander signed a new deal with Surrey that was due to run until the end of his England career, and which will cease once his ECB central contract is terminated.

In the past, some counties have been left facing a large wage bill when international players have lost their central contracts.

But Surrey, one of the wealthiest clubs in the country, are in a position to negotiate with Pietersen when he becomes a free agent.

His relationship with the county is good. Before the news of his England axing broke on Tuesday, Pietersen was leading a coaching session on how to play spin bowling for the county's other batsmen.

After Pietersen was told his international career was over, former England captain and Surrey director of cricket Alec Stewart said: "He'll be very welcome to come and play here.

"Every time he has pulled on a Surrey shirt he's been a model professional, he's been very popular in the dressing-room and most importantly he has gone out in the middle and performed.

"I'd like to think we'll see him in a Surrey shirt and am very disappointed I won't see him in an England shirt again."