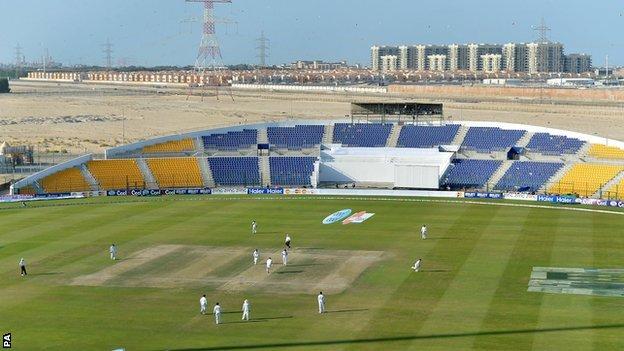 Worcestershire are to warm up for this summer's county cricket campaign with a pre-season tour to Abu Dhabi in March.

A year ago, with their New Road home under water, the county were forced to perform their pre-season preparations under a big tent in Kidderminster.

But chief executive David Leatherdale has revealed that this time round they can go to the Persian Gulf for 10 days.

"The itinerary includes two Twenty20s with New Zealand. That was one of the main reasons for going," he said.

"We'll have 10 days in Abu Dhabi, during which we hope to have eight days of cricket.

"It also coincides with Derbyshire being out there.

"The likelihood is that we will play a UAE Invitation XI, possibly Afghanistan, certainly Derbyshire and certainly New Zealand," he told BBC Hereford & Worcester.

Worcestershire, currently training indoors at nearby Malvern College, with New Road under water again, are then due to return to England in late March.

They have two three-day friendlies against Somerset and Gloucestershire, as well as two one-day matches, against Gloucestershire and Glamorgan, before the 2014 county cricket season starts with the four-day trip to The Rose Bowl against Hampshire on 6 April.

With Pakistan Test spinner Saeed Ajmal not expected to arrive until April, the only absentee from the county's tour party will be Moeen Ali.

On the back of his performances with England Lions this winter, Moeen has now become one of the chief beneficiaries of Kevin Pietersen's international career coming to an end, having been selected for the forthcoming West Indies tour and ICC World Twenty20 tournament.

"He fully deserves it after what he's done over the last 12 to 18 months," added Leatherdale. "He's done pretty well with the Lions.

"He just loves playing his cricket. The more he seems to play, the better he's got and the more consistent he's got. And that was just what we asked him of him a couple of years ago."

Moeen will be part of an England squad due to take on a three-match ODI series in Antigua (28 February, 2 March, 5 March), followed by a three-match Twenty20 series in Barbados (9/11/13 March) before heading for Bangladesh where there are four scheduled matches.

England play all their Super Eight matches in Chittagong, against New Zealand (22 March), Sri Lanka (27 March), South Africa (29 March) and one of the qualifiers (31 March).

If they go on to make the final in Mirpur on 6 April, that would mean Moeen missing the start of the new domestic season.