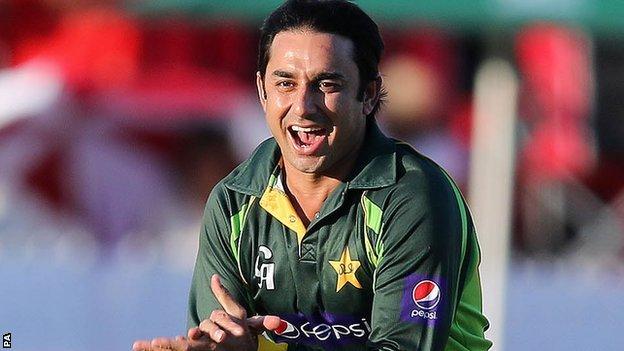 Worcestershire hope to have Pakistan international spinner Saaed Ajmal at New Road for most of the summer.

Hit by the unexpected retirement of fast bowler Alan Richardson, the spearhead of their attack, the county may prove more spin-orientated in 2014.

Ajmal, 36, who confirmed his New Road return in November, is set to play for Pakistan in March's ICC World Twenty20.

"Saeed should be here for four months of the season," said Worcestershire chief executive David Leatherdale.

"He'll probably bowl more than other spinners might and dovetail with Moeen Ali."

If Pakistan get to the final of the World Twenty20 in Mirpur on 6 April, Ajmal would miss Worcestershire's first County Championship game of the season against Hampshire at Southampton, which starts the same day.

"We do expect him to be in the Pakistan squad," added Leatherdale. "And, with a potential final on 6 April, he could miss our first match, depending on how far they get.

"He will also probably be away for four or five weeks in July and August, for the Caribbean Premier League, which is not confirmed yet, but is likely.

"It's a case of getting them here for the right length of time, which is getting more and more difficult.

"We'd also look at getting a second overseas player for the Twenty20. But we have a good all-round squad.

"Obviously, we're going to miss Alan Richardson. He's been fantastic for us for the last four years.

Obviously, we're going to miss Alan Richardson. He's been fantastic for us for the last four years

"The opportunity came out of the blue when Graeme Welch went back to Derbyshire as head coach and Alan was approached by Warwickshire.

"But he's 39 in April, he only had one more year on his contract and, although we wanted him to be with us, with all he's done for the club, we felt that it was important that he has a future outside the game for the next 20 years."

Richardson is the second Worcestershire paceman to retire since the turn of the year, following left-armer David Lucas's decision to call time on his career.

And Richard Jones, initially signed by Warwickshire on loan at the end of last season, made the same move as Richardson to Edgbaston in November.

Even allowing for a greater reliance on spin, that leaves vacancies in Worcestershire's pace bowling department.

"If we could find the right one, the budget is there," added Leatherdale. "And whoever we did bring in would hopeful play in all three forms of the game.

"Alan only played four-day cricket. He didn't really play the one-day stuff. But it's not something we're going to do for the sake of it.

"We've got lads who've all now got the chance to prove themselves. Jack Shantry had a great season in 2013, Gareth Andrew has come back from his injury the year before and Nick Harrison was not fit at all last year with a shin injury. And, along with Chris Russell and Graeme Cessford, they're all going to get an opportunity."