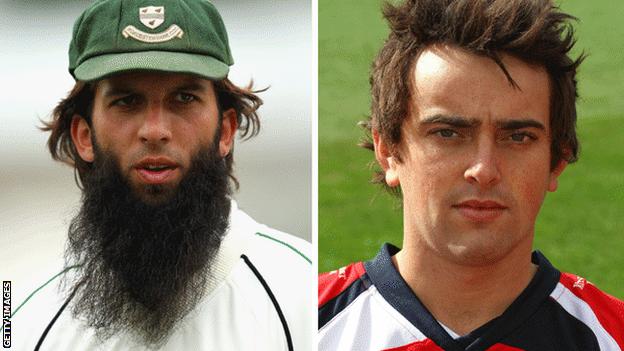 Worcestershire all-rounder Moeen Ali and Lancashire spinner Stephen Parry have been named in England's squad for the limited-overs series in West Indies and the World Twenty20 in Bangladesh.

Nottinghamshire left-arm paceman Harry Gurney has been selected only for the tour of the Caribbean.

Moeen, Parry and Gurney are all uncapped in all international formats.

"It's an exciting opportunity for Moeen and Stephen," said national selector James Whitaker.

Stephen Parry: Has played only six first-class matches, but has appeared in 56 Twenty20 games

Moeen Ali: Called up to the England Lions team in 2013 which played Australia

Harry Gurney: Part of Leicestershire's squad in the 2011 Champions League Twenty20 in India

They will then travel to Bangladesh for the World Twenty20, which takes place between 16 March and 6 April.

This is England's first squad announcement since batsman Kevin Pietersen was told he is no longer part of the national team's plans.

It had previously been confirmed that Test and one-day captain Alastair Cook, who has not played in the Twenty20 side since 2009, would be rested for the ODI series in the Caribbean.

In Cook's absence, Stuart Broad will captain the squad in the West Indies and Bangladesh, with Eoin Morgan vice-captain for both tours.

Aside from Cook, seven other players in the squads for the recent limited-overs series in Australia - batsmen Ian Bell, Gary Ballance and Michael Carberry, all-rounder Chris Woakes, pacemen Boyd Rankin and Steven Finn, and spinner Danny Briggs - are not included.

Whitaker revealed that Andy Flower, who stood down as England team director last month following the 5-0 Ashes whitewash in Australia, was involved in selecting the tour parties.

"By the time we select again at the start of the summer, I don't know what the situation will be," Whitaker added. "We are interviewing for another selector next week."

On the uncapped players, he added: "We would like to congratulate Moeen and Stephen on their selection for the tour to the Caribbean and then to represent England in the ICC World Twenty20.

"Harry Gurney, under the guidance of the excellent coaches at Trent Bridge, has performed well for Nottinghamshire in limited-overs cricket - showing good control with the white ball and, as a left-arm quick, brings some variety to the tour party."

Moeen, 26, was named player of the year by the Professional Cricketers' Association in October.

He scored more than 2,000 runs in all formats in 2013, taking 55 wickets with his off-spin, and also appeared for the England Lions on their tour of Australia.

Slow left-armer Parry, 28, has played only six first-class matches, but has appeared in 56 Twenty20 games.

He told BBC Radio Lancashire: "I've managed to produce it consistently over a period of time and the selectors now feel that I'm ready. I've got a lot of Twenty20 experience and they've decided to go with me, which is fantastic.

"Every county cricketer wants to play for their country. Whether you're 19 or 33, you're always trying. It's happened for me, I'm very grateful and I'm really looking forward to the opportunity."

Gurney, 27, was leading wicket-taker in Leicestershire's 2011 T20 campaign, with 23 scalps, before joining Nottinghamshire.

Notts coach Mick Newell told BBC Radio 5 live: "He'll hopefully be in the style of Mitchell Johnson in years to come. He's got some good pace, up towards 90mph.

"England are looking for a left-armer that will give them something different and, at the minute, Harry is the fittest and strongest of those in contention."