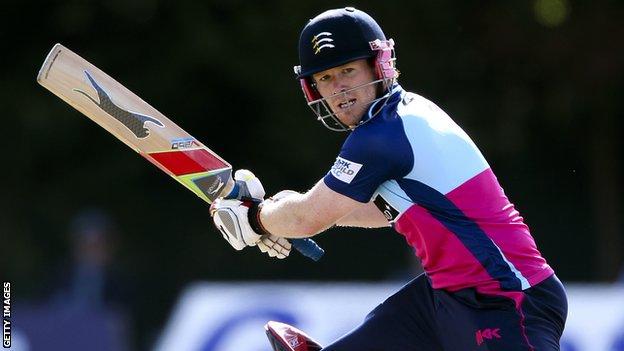 The 27-year-old left-hander is vice-captain of England's 50-over and Twenty20 sides.

"Middlesex are fortunate, in Eoin, to have one of the game's best young cricket brains at the club," managing director of cricket Angus Fraser said.

"I am confident that he has what it takes and will prove to be a fine captain for both teams."

Morgan, who has been included in England's squads for the upcoming tour of the Caribbean and the World T20 in Bangladesh, is expected to play in all but three of Middlesex's matches in the One-Day Cup and the T20 Blast this summer.

Having begun his international career for Ireland, Dublin-born Morgan has played a total of 112 one-dayers and 41 T20 games, and has led England on a total of nine occasions in the absence of the regular skippers.

However, he was not awarded a central contract for 2013-14 by the England & Wales Cricket Board and has not played a Test match since February 2012.

Morgan became Middlesex vice-captain in 2009, but stepped down from the post when he became an England regular.

"Captaincy has always interested me and it is something I am looking forward to developing over the coming months," he said.

"I have been at Middlesex for a long time now and, in the past, I have shown leadership with my bat. I now feel I can expand that leadership role by captaining the side."

Dexter, 29, asked to step down as one-day captain to concentrate on improving other aspects of his game, having previously led the side in all formats between June 2010 and April 2012.

"Middlesex totally understands Neil's position and his desire to focus on his own game. Captaining a team is an honour but it is also stressful and tiring," Fraser added.