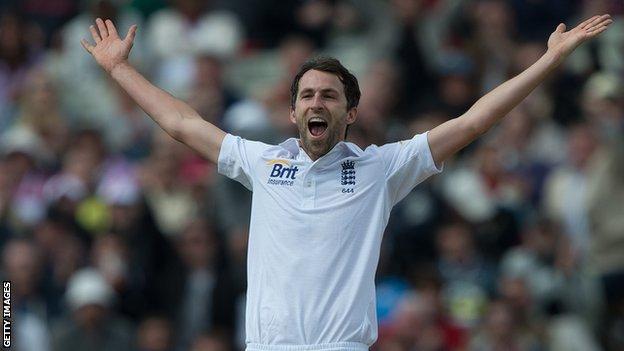 Durham paceman Graham Onions has been drafted into the England Lions squad for their current tour of Sri Lanka.

The 31-year-old replaces Durham team-mate Mark Wood, who will fly home after suffering a side injury.

Onions, who has played nine Tests, was overlooked for England's Ashes squad despite claiming 70 wickets in Durham's County Championship success in 2013.

"This presents a good opportunity for Graham to join up with the Lions," said national selector James Whitaker.

Since missing out on Ashes selection, Onions has spent the winter playing for Dolphins in South Africa.

Whitaker said Onions could play an important role in their series against Sri Lanka A which begins on 12 February.

"We have been monitoring his progress in South Africa, and now this presents him with a chance to impress ahead of the summer international series," he added.

Seamer Wood, 24, suffered his injury during the opening warm-up match in Colombo last week and will continue his rehabilitation in the UK.

"Mark had a very impressive start to the Lions tour, taking five wickets in the first warm-up match," said Whitaker.

"However, having been injured, it is very important that he has every chance of starting the season for Durham in the best possible condition."