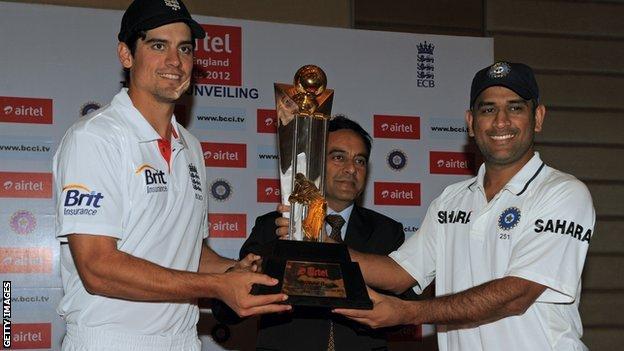 England, Australia and India will be given more control of cricket after a vote by the sport's governing body.

The measures agreed by the International Cricket Council (ICC) will overhaul the sport's governance, competitions and finances.

A new revenue-sharing agreement will give the lion's share of money to the 'Big Three' nations.

Associate members, including Ireland and Scotland, will also now have the chance to play Test cricket.

Under the changes, the World Test Championship idea has been scrapped and the Champions Trophy will return in 2017.

The changes, which still need to be formally adopted by the ICC council, will see the formation of a new executive committee of five members, with the England and Wales Cricket Board (ECB), Cricket Australia (CA) and Board of Control for Cricket in India (BCCI) all guaranteed a place.

The ICC's executive board - a panel on which all 10 Test-playing nations sit - currently agrees all major decisions.

Among the other key principles are the scrapping of the planned World Test Championship and the introduction of a new two-tier system that will give ICC associate members the chance to play Test cricket with the introduction of play-offs against the lowest-ranked Test nation.

And the ICC's 10 full members - Australia, Bangladesh, England, India, New Zealand, Pakistan, South Africa, Sri Lanka, West Indies and Zimbabwe - will no longer be obliged to play each other regularly after the Future Tours Programme was scrapped in favour of bilateral agreements between nations to cover Test series between 2015 and 2023.

England Cricket Board boss Giles Clarke is adamant changes are necessary and says all countries will profit financially if England, India and Australia are given more power to negotiate broadcasting and marketing deals on behalf of the ICC.

"All countries earn more through this proposal," said Clarke. "No member would earn less and, if our predictions are correct, most will earn an awful lot more. How can that be bad for cricket?"

Eight of the 10 full members voted in favour at the ICC meeting in Singapore, with Pakistan and Sri Lanka choosing to abstain.

The former chief executive of the Pakistan Cricket Board, Arif Abassi, has warned that the measures could create deep divisions in the world game, and targeted India for criticism.

Abassi told Lee James on BBC Sports World: "I can't reconcile myself with what India are doing, We can't have this bulldozing from India.

"The ICC is like a company and a company needs level playing fields. This is being done at the expense of equality. This will lead to division and polarisation in the game.

"The money that comes into the game is not because of India, it's because of the overall picture of Test cricket. I cannot endorse this behaviour from India."

Cricket South Africa (CSA), who had earlier voiced concerns about the changes, stressed that the agreement reached by the ICC is a work in progress.

"Nothing in life is perfect," commented CSA President and chairman, Chris Nenzani in a statement on the CSA official website. "All countries, including the so-called 'Big Three', have had to rethink and make concessions.

"It was key that we remain engaged and an absolute imperative that we should preserve the financial stability of the game over the next eight-year cycle from 2015 to 2023."