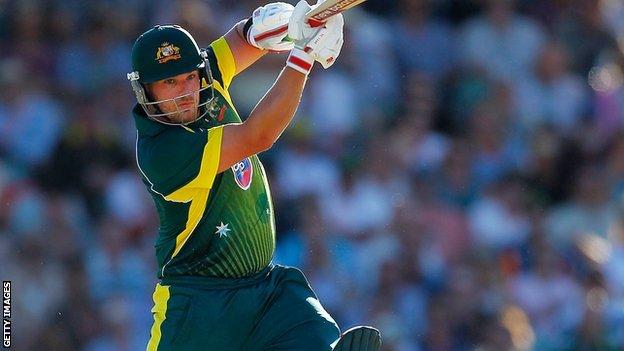 The 27-year-old Melbourne Renegades Twenty20 captain will join up with the Headingley side after this season's Indian Premier League.

He holds the record for a T20 international innings after scoring 156 against England in August but will play all forms of the game for Yorkshire.

"This is one of the biggest cricket clubs in the world with a history and tradition second to none," Finch said.

"I've heard so much about the place and can't wait to join up with Jason Gillespie [Yorkshire first-team coach] and the rest of the squad in May.

"When I heard Yorkshire were interested in signing me, I had no hesitation in signing. I had a good chat with Darren Lehmann [Australia coach] and he recommended that I joined the club. He can't speak highly enough of the place and Yorkshire's loyal supporters."

He has also hit three centuries for Australia in 50-over cricket, but hopes to use his stint in county cricket to prove he is more than just a big hitter.

"Even though the T20 season will be very exciting, I'm looking forward to testing myself in red-ball cricket too," he added.

"It is important for my cricket development to play in English conditions and to help Yorkshire be a force in all forms of the game will be a good challenge for me."

Finch, who has an average of 45.80 in T20 internationals, replaces compatriot Phil Jaques at Headingley and will share overseas player duties with New Zealand's Kane Williamson.

He could make his debut for Yorkshire against Northants in the T20 Blast on 16 May.