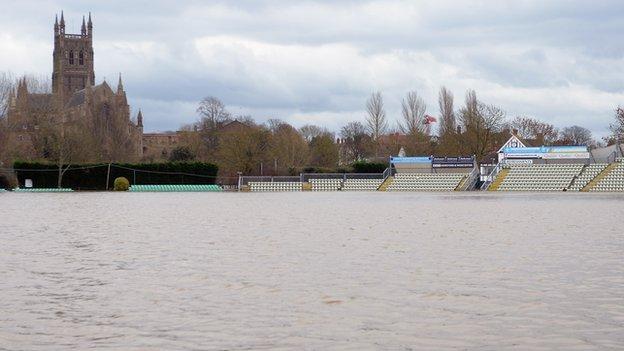 Flood damage at Worcestershire's New Road home may force the county to consider starting the 2014 season at neighbouring Kidderminster.

A year ago, the winter weather forced them to move pre-season training to Chester Road, the county's official second home since 2007.

And with New Road submerged again, plans have already been pencilled in to move pre-season games to Kidderminster.

We've had well over 150 floods in the history of the club and we just have to try and manage it the best we can.

The first Championship game of the season at New Road begins on 13 April.

But while that fixture against Kent is still eight weeks away, the county are due to play Glamorgan at home in a one-day friendly a fortnight earlier, on 31 March.

The county's chief executive, David Leatherdale, told BBC Hereford & Worcester last week that he was optimistic about the prospects for clearing the ground.

"We've flooded in March before and even right up to the beginning of April," he said.

"We've had well over 150 floods in the history of the club and we just have to try and manage it the best we can. A couple of good weeks' weather in March and we'll be back to normal again."

However, a further week's rain since then and forecasts of further bad weather have put Leatherdale and his groundstaff on red alert.

New Road made headlines in June 2007 when, as a result of the second-worst flood in the ground's history in terms of the depth of water on the ground, they were unable to play there again for the rest of that season.

But it is during winter months when most flooding occurs and even though the club budget for it, this year is also proving to be one of their worst on record.

On a wet wicket at Worcester

With flood water staying on the ground for long period, there is a danger that it can kill the grass, but last week's brief receding of the waters did at least allow the groundstaff sufficient access to the playing area to clear away some of the debris.

"We did some preliminary work on the square and dragged it to get rid of the silt, which is always the issue if it settles," added Leatherdale.

"With it only 12 inches deep, the lads can get out there in their waders to make sure that it doesn't settle.

"Added to that, we reseeded the outfield early last year, with the season having finished early, and the grass has come through pretty well."

The club might have had to move home fixtures last year after the ground was under water for five weeks, but did not have a game at Worcesterd until May because a hotel, new offices and banqueting suites were under construction at the New Road End.

The new facilities, known as 'The View' are now fully operational and bringing in much-needed money for the County Championship Division Two club.

But, with the main bridge in the town closed, and roads in the vicinity under water, the ground was finally forced to shut on Wednesday.

While the club tries to get the square ready in time for the new season, the players at least are in good shape.

Unlike last year when they had pre-season nets under a 40m-high tent at Chester Road, this year they have been doing their indoor training at Malvern College before heading off to the Persian Gulf for eight days of cricket in Abu Dhabi.