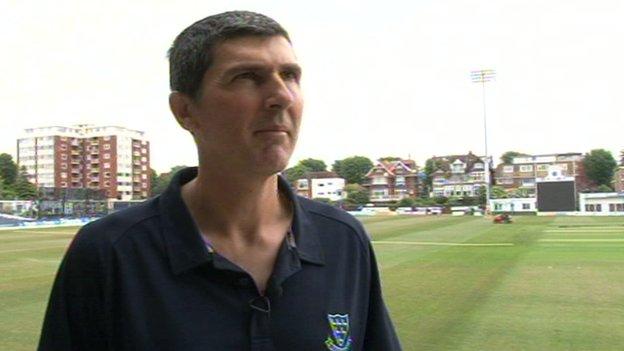 Sussex coach Mark Robinson will put his name forward to be considered for the position of England technical director.

Andy Flower stood down from the role last month following the 5-0 Ashes series whitewash in Australia.

Robinson, 47, has won the County Championship twice with Sussex and is currently leading the England Lions in Sri Lanka.

"I'd love to do it. I am ambitious to have an opportunity, even if it is an outside one," he told BBC Sussex.

"To represent your country is something you can't turn down. These opportunities and chances don't come up often. Whether I get it is a different issue."

England limited-overs coach Ashley Giles and Lancashire coach Peter Moores are among the contenders to replace Flower, who left his position with the England & Wales Cricket Board on 31 January.

Robinson, who has previously coached the England Under-19 side, played 229 first-class matches for Northamptonshire, Yorkshire and Sussex between 1987 and 2002.

He has won the Twenty20 Cup and three other one-day trophies alongside his Championship titles since taking charge at Hove in 2005.

"It jolts you when Andy left and it was a shock to everybody," Robinson said.

"I'd love to put my hat in the ring because it's the pinnacle of anybody's career to represent their country.

A fast-medium bowler, Robinson played 229 first-class matches for Northamptonshire, Yorkshire and Sussex between 1987 and 2002.

He became cricket manager at Hove in late 2005 after Peter Moores took up a post with the ECB national academy.

"I'd be excited about trying to see if they'd look to Sussex for Andy's replacement."

Asked if he had applied for the England job, Robinson replied: "I don't think we are at that stage yet.

"They have asked for candidates to put their names forward at the end of this week, as I understand.

"I've spoken to a couple of people to see whether it is worth my while, and it is something I am going to do.

"The most important thing is to concentrate on what you are doing at the moment.

"I have two jobs. One I am doing with the England Lions and [the other] making sure everything is running smoothly in Sussex in the able hands of Mark Davis, Keith Greenfield and Carl Hopkinson. It's important I don't look too far ahead as well."