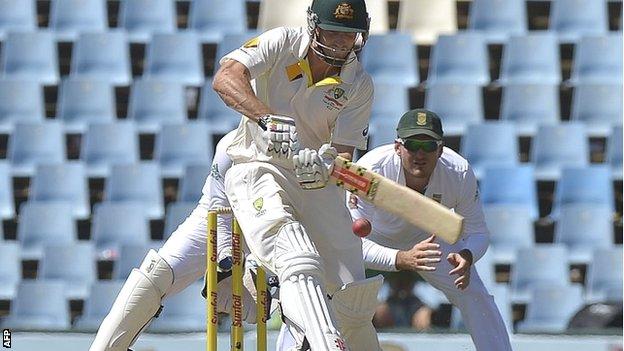 An unbeaten century from Shaun Marsh guided Australia to 297-4 on the opening day of the three-Test series against South Africa.

Marsh, 30, who overcame a calf problem to replace the injured Shane Watson, hit 12 fours in his second Test ton.

When skipper Michael Clarke hooked to fine-leg, Australia were 98-4 having been asked to bat first in Pretoria.

But Marsh, who survived a difficult chance when on 12, shared an unbroken stand of 199 with Steve Smith (91).

Western Australia left-hander Marsh, whose father Geoff played 50 Tests for Australia from 1985-1992, was originally left out of the tour because of a calf problem.

But an earlier than expected recovery allowed him to come into the Test team for the first time since January 2012 in place of Watson, who was ruled out with a similar injury.

David Warner hit two fours from Dale Steyn in the first over of the match but edged the paceman onto his stumps in the fifth over, while Chris Rodgers gloved Morne Morkel to short-leg four overs later.

Hashim Amla was unable to cling on to a fiercely-struck cut from Marsh, and debutant Alex Doolan helped add 48 for the third wicket with a confident 27 before he pulled to mid-wicket.

South Africa, Test cricket's number one-ranked side, have yet to beat the Australia in six home series since their readmission in 1992, but Steyn captured his second wicket after Clarke's misjudgement in the seventh over of the afternoon session.

But Marsh recorded only his ninth hundred in a first-class career stretching back to 2001, and Smith finished nine short of a fourth Test century for the tourists, who moved up two places to third in the rankings behind the Proteas and India after completing their 5-0 whitewash of England in January.