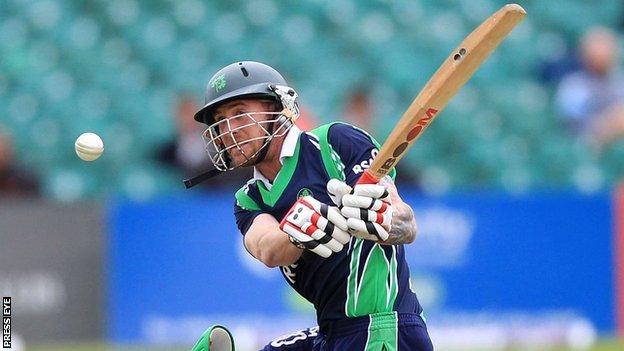 All-rounder John Mooney has not been named in Ireland's 15-man squad for the ICC World Twenty20 tournament in Bangladesh which starts next month.

Mooney left the team's current tour of the West Indies last week because of a stress-related illness.

James Shannon, who replaced Mooney, retains his place for the tournament where Ireland will begin their challenge against Zimbabwe on 17 March.

Andrew White misses out after being omitted for the West Indies tour.

However, the team has an experienced look with captain William Porterfield, Alex Cusack, Paul Stirling, Gary Wilson and the O'Brien brothers, Kevin and Niall, set to feature in their third World Twenty20 tournament.

Shannon is one of four players who will be involved in their first World T20 with the others Andrew McBrine, Andrew Poynter and Craig Young.

Ireland suffered heavy defeats in their opening West Indies tour games against Guyana and Jamaica but coach Phil Simmons believes morale has been boosted by last weekend's win over the Windward Islands.

"I'm pleased with how the preparation has gone this past fortnight," said Simmons.

"We've got three challenging games against the West Indies coming up, followed by a week's training camp in the UAE, before going to Bangladesh.

"We play Nepal and the hosts in warm-up games so there's no danger of us being under-cooked for the round one matches."

If the Irish progress from their opening group, they will then face matches against Sri Lanka, South Africa, New Zealand and England.

The Irish earned a three-wicket win over a Trinidad & Tobago B selection in a Twenty20 clash in Trinidad on Sunday.

Paul Stirling hit a 38-ball 79 which included seven fours and three sixes as the Irish chased down the opposition's 138-4 with three balls to spare.

Stirling's innings included 41 accumulated from only two overs while Kevin O'Brien (21) was the next best Irish scorer.