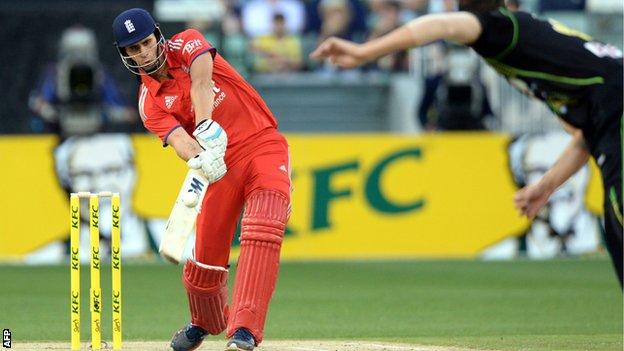 Kevin Pietersen will be the only current or former England international in the 2014 Indian Premier League after Alex Hales and Ian Bell were among 10 Englishmen left unsold.

Surrey batsman Pietersen, discarded by England last week, was bought for £880,000 by the Delhi Daredevils.

Nottinghamshire's Hales, second in the ICC Twenty20 batting rankings, said: "It's not the end of the world."

A total of 154 players were bought during the two-day auction.

Hales, 25, is in England's squad for the World Twenty20 tournament in Bangladesh between 16 March and 6 April.

He added: "Historically, English players haven't fared too well in those [Indian] conditions and it would have been a good test of character to have been out there and challenge myself.

"Any chance an English player has to be involved in cricket on the subcontinent will improve them."

A total of 514 players were up for sale for the seventh edition of the IPL, which starts in April.

India all-rounder Yuvraj Singh had the honour of being the most expensive buy at £1.4m for Bangalore in an auction which did not break any records.

Essex's Netherlands all-rounder Ryan ten Doeschate, 33, will once again be in the Kolkata Knight Riders squad, and will earn just over £110,000 for the privilege.

Meanwhile, South Africa-born batsman Pietersen may be set for a stint of IPL back in his native country if organisers decide next week to transfer part of the tournament there to avoid a clash with elections on home soil.