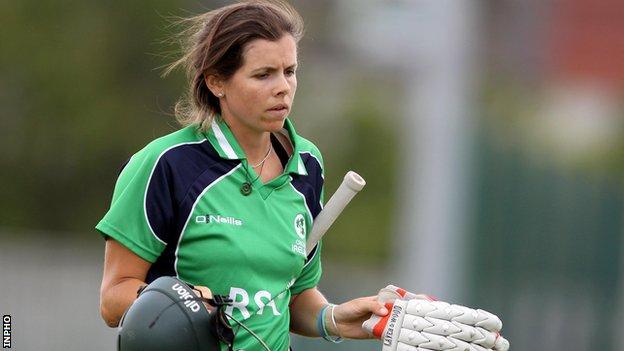 All-rounders Eimear Richardson and Kim Garth have been named in the Ireland squad for next month's ICC Women's World Twenty20 in Bangladesh.

The pair replace batter Rebecca Rolfe and bowler Amy Kenealy in two changes from the squad which beat Pakistan in a T20 game in Qatar last month.

Ireland start their challenge against New Zealand on 25 March.

The women's team is coached by Trent Johnston, the all-rounder who retired from Ireland duty in December.

"They've worked incredibly hard this past few months and you get the feeling that this could be the start of something really big and exciting in women's cricket in Ireland," said Johnston.

"You just don't know where success could take the game. We're introducing new elements into the squad, looking to take the players out of their comfort zone.

"We want them to be brave, positive, and show real intensity with their cricket. That comes with confidence, and that's what the coaching staff will be looking to instill in the weeks ahead."

Richardson has been playing cricket in New Zealand over the winter, while 17-year-old Garth, daughter of two former Irish internationals, is currently studying for exams.

Ireland will also take on holders Australia, South Africa and Pakistan in their group matches.