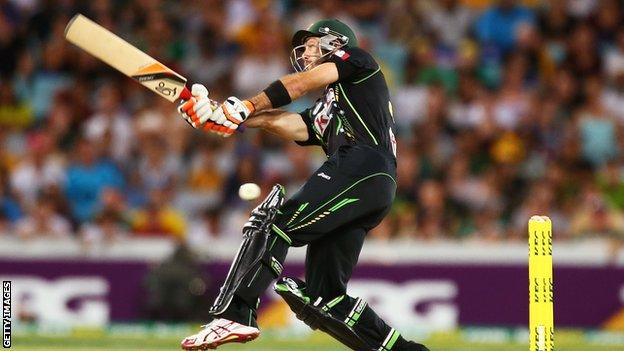 Hampshire have signed Australia all-rounder Glenn Maxwell for a second spell at the club.

The 25-year-old, who played for the county during the 2012 season, will play in this season's T20 Blast.

Maxwell could feature in other formats, depending on the availability of South African overseas bowler Kyle Abbott.

Director of cricket Giles White said: "Maxi is an extremely popular figure here, both amongst the playing group and with the supporters."

He continued: "His all-round qualities make him a great fit in what is shaping up to be an exciting T20 squad."

Maxwell said: "I've made a lot of close friends from the Hampshire squad and management and I look forward to being part of another successful season with them."

A regular fixture in the Australia limited-overs set-up, Maxwell made 94 and 127 for Victoria in their Sheffield Shield first-class match against New South Wales recently.

He signed to play Twenty20 cricket for Hampshire in 2012, starring in the group stages, but had to leave after the quarter-finals after his maiden call-up for Australia, and has since appeared in two Tests, 24 one-day internationals and 15 T20 internationals for his country.

He featured for Hampshire in the Champions League T20 later that year, but after fetching the highest bid at the 2013 Indian Premier League auction - $1m (£637,000) from Mumbai Indians - he then played for losing finalists Surrey in last season's T20 competition.