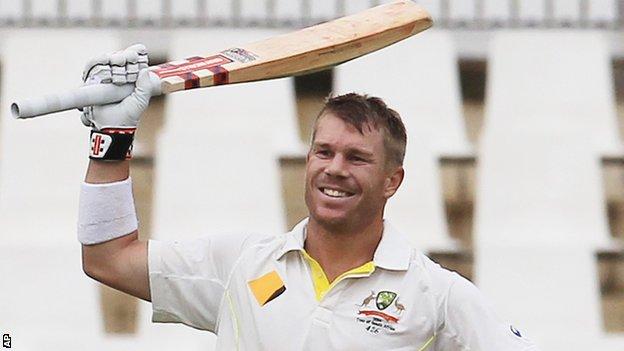 Fine displays from Mitchell Johnson and David Warner put Australia in control after day three of the first Test against South Africa at Centurion.

Fast bowler Johnson, man of the series in Australia's 5-0 Ashes whitewash of England this winter, finished with figures of 7-68 as the hosts were all out for 206 in their first innings.

He is the third Australian after Shane Warne in 2002 and Brett Lee between 2006 and 2008, while Sri Lankan Muttiah Muraliltharan managed it on two separate occasions.

Warner (115) and Alex Doolan then put on 205 for Australia's second wicket.

Johnson, 32, had ripped through South Africa's top order on Thursday and completed the job on Friday morning to move past former Test captain Richie Benaud to a career tally of 249 wickets, seventh in Australia's all-time list.

South Africa added just 66 runs for their last four wickets, with AB de Villiers' 91 the only resistance to Johnson's pace.

Australia's second innings got off to a bad start before lunch when opener Chris Rogers chopped Dale Steyn's first delivery on to his stumps in the second over.

But Warner, who was dropped twice, and debutant Doolan then batted South Africa out of the game, with some fierce hitting around the square.

But first-innings centurion Shaun Marsh and captain Michael Clarke helped Australia to 288-3 at stumps, with South Africa likely to be set a huge score to save the Test.