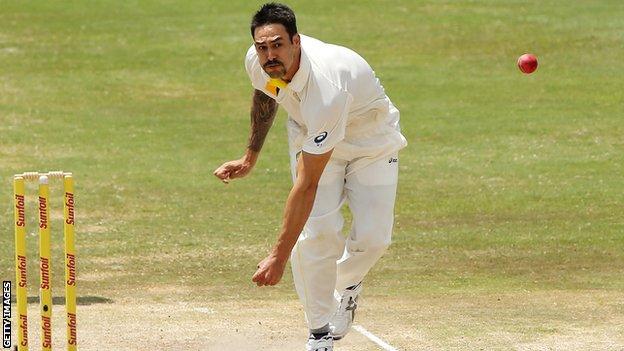 Mitchell Johnson secured his best Test figures as Australia wrapped up a crushing 281-run victory over South Africa on day four of the first Test.

The 32-year-old left-arm paceman, man of the series as Australia whitewashed England in the Ashes, took match figures of 12 for 127 at Centurion.

Johnson followed his first-innings 7-68 with 5-59 as the Proteas were dismissed for 200 in their second innings.

"You never play a perfect game but it felt really good out there," he said.

Australia captain Michael Clarke added: "Mitchell is on top of his game. He has amazing pace, is fit and strong, and executes his plans perfectly.

"Statistics don't lie and his record is as good as any fast bowler I have ever played with."

Johnson's figures were also a record for any bowler in Tests at Centurion.

Australia declared after 3.2 overs of day four having added only two runs to their overnight 288-3 second innings total.

Chasing an unlikely 482 to win the hosts - number one in the world Test rankings - slumped to 12-2 as Johnson accounted for openers Alviro Petersen and captain Graeme Smith.

Johnson added the wicket of JP Duminy before tea and continued his assault after the interval with the dismissals of Ryan McLaren and AB de Villiers, who followed up his 91 in the first innings by top-scoring with 48 in the second.

The fast bowler was ably supported by Peter Siddle, who claimed the wickets of Faf du Plessis and Robin Peterson, and Ryan Harris, who chipped in with the dismissals of Hashim Amla and Dale Steyn.

South Africa captain Graeme Smith admitted: "We were outplayed from the word go. It is one of the most disappointing four days we've had for a long time."

The second Test of the three-match series starts in Port Elizabeth on Thursday.