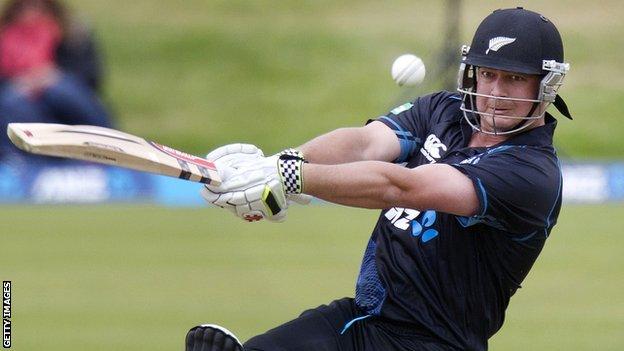 New Zealand have left troubled batsman Jesse Ryder out of their squad for next month's ICC World Twenty20 tournament.

The 29-year-old was dropped from the squad for the current Test against India after he went on a late-night drinking session before the first Test.

Ryder has a history of disciplinary and personal issues throughout his career.

"[Coach] Mike Hesson and I weren't happy with his preparation, therefore we have had to exclude him," said national selection manager Bruce Edgar.

"Character is really important and if we feel it does not stack up we will not select a player."

Ryder had only just returned to international cricket after nearly two years out of the side, playing in January's limited-overs series against West Indies and India.

In 2012, Ryder announced he was taking an indefinite break from the game, although he soon returned to play in the lucrative Indian Premier League. However, it was more than just his cricket career that was in doubt in March 2013 when he was assaulted outside a bar in Christchurch and placed in a medically induced coma after suffering a fractured skull and severe internal injuries.

After recovering, the burly left-hander had to serve a six-month doping ban for two outlawed stimulants after taking a dietary supplement to aid weight loss, but last week Hesson said team officials had "lost confidence" in Ryder and seamer Doug Bracewell after their night out just before the first Test.

Ryder's omission, while denting the Black Caps' run-making ability at the top of the order, gives a chance to fellow batsman Kane Williamson, who is a Test and one-day regular, but has not played a Twenty20 international since the last World Twenty20 event in September 2012.

"It certainly created a gap for us," added former Test opener Edgar, who added that Williamson's part-time off-spin could also help the side in Bangladesh, where the tournament begins on 16 March.

New Zealand will face England (22 March), South Africa (24 March), a qualifier (29 March) and Sri Lanka (31 March) in their group matches, all to be played in Chittagong.