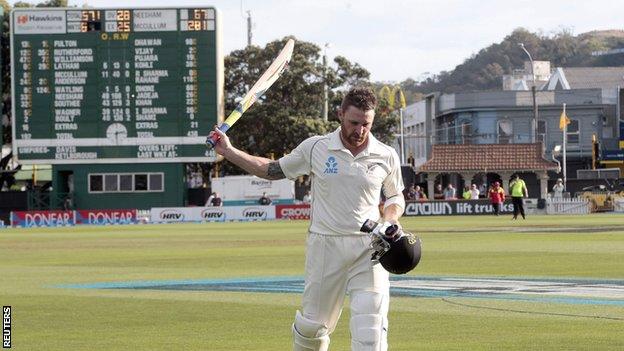 New Zealand captain Brendon McCullum batted through the fourth day of the second Test against India in Wellington to continue a remarkable fightback.

Debutant Jimmy Neesham (67 not out) helped McCullum through to the close.

Only Martin Crowe's 299, scored on the same ground against Sri Lanka in 1991, stands between McCullum and a place at the summit of the Black Caps' all-time highest innings list.

New Zealand, who had trailed by 246 at the end of the first innings after the tourists racked up 438 on the second day, had been in dire straits at 94-5 when McCullum and Watling came together just after lunch on day three.

They still trailed by 151 at that point - but the McCullum-Watling stand, the third best New Zealand partnership for any wicket, lasted 123 overs to drag their side from contemplating an innings defeat to entertaining thoughts of victory on the final day at the Basin Reserve.

Meanwhile, Watling's 124 came from 367 balls - the longest innings by a New Zealand wicketkeeper.

India captain Mahendra Dhoni had rotated his bowlers to no avail, and even took his wicketkeeping pads off to bowl the 159th over himself.

Two overs later, they made the only breakthrough of the day as Watling was trapped lbw by paceman Mohammed Shami after India took the third new ball.

But aided by Neesham, McCullum kept going - his 281 coming from 525 balls and containing 28 fours and four sixes - before he walked off to a standing ovation at the close.

New Zealand lead the two-match series 1-0 after they won the first Test in Auckland - McCullum also hitting a double century in that game.