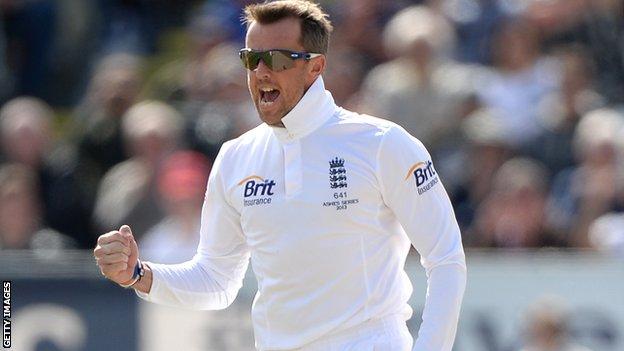 The 34-year-old retired in December, midway through the 5-0 Ashes Test series defeat in Australia.

"I grew up listening to Test Match Special, it's an honour to have a chance to work with the team," he said.

Swann was part of three Ashes-winning teams and played 60 Tests for England, capturing 255 wickets, a total that put him sixth on the all-time list of English bowlers.

He also made 79 one-day international appearances and took 104 wickets, and played in 39 Twenty20 internationals, taking 51 wickets.

The former Northants and Nottinghamshire spinner was a member of England's 2010 ICC World Twenty20-winning team and captained England in three T20 games in 2011.

"It's an honour to continue my relationship with BBC Radio," he added. "I am particularly looking forward to returning to the Kensington Oval in Barbados with so many happy memories of our World Twenty20 victory there in 2010."

"After so recently leaving the England set-up, Graeme will bring genuine insight to the audience, analysis of the game as well as his trademark sense of humour."

England play three ODIs and three T20s against the West Indies from 28 February - 13 March and each match will be available on BBC Radio 5 live sports extra and the BBC website.