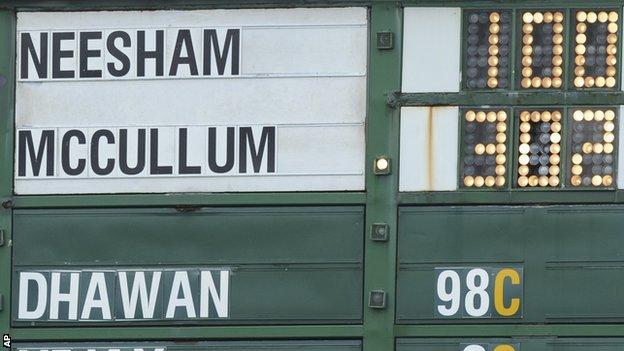 Brendon McCullum became the first New Zealander to score a Test triple century as his side drew the second Test with India to win the series 1-0.

McCullum, 32, shared a Test-record sixth-wicket stand of 352 with wicketkeeper BJ Watling (124) as the hosts declared on 680-8 in Wellington.

That was the Kiwis' highest Test score and also a world-record total for a third innings in Test cricket.

India were 166-3 at the close, with Virat Kohli 105 not out, as they failed to avenge their 40-run defeat in the first Test in Auckland.

McCullum, 32, hit 224 in that match but this time surpassed the 299 Martin Crowe made at the same venue against Sri Lanka in January 1991, becoming only the 27th triple centurion in Test history.

After a nervous moment on 293 when he edged a ball from Ishant Sharma that fell short of Mahendra Dhoni, he chopped away a Zaheer Khan delivery to the boundary to pass 300.

But he was out just two balls later, edging Zaheer Khan through to Dhoni.

McCullum's side had been staring defeat in the face when, with five wickets down and needing another 152 runs to prevent an innings defeat in the second Test, Watling joined him at the crease.

But the duo turned the match on its head before Jimmy Neesham added an unbeaten 137, the highest score by a debutant batting at number eight, to see New Zealand to safety.

The draw means India remain without a Test victory away from home since 2011.