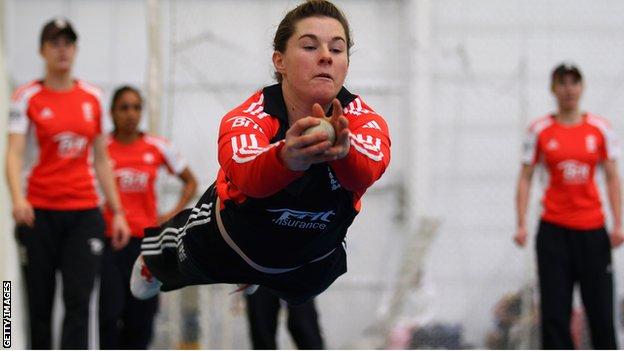 Beaumont and Wilson, both 22, were left out of the squad that beat Australia to retain the Ashes down under last month.

However, the duo have played well for the academy side in Sri Lanka and are included in a 15-woman squad, with Charlotte Edwards again captaining.

Dibble, 19, who plays for Devon, and 23-year-old Grundy from Warwickshire, are both yet to play a full international for England, but have previously played at academy level.

England won the first women's T20 competition in 2009, but lost by four runs in the 2012 final against Australia.

Missing from the squad which were on duty in the recent Women's Ashes are all-rounder Arran Brindle, who has retired, and injured pace bowlers Katherine Brunt and Natasha Farrant, as well as all-rounder Danielle Wyatt and batter Lauren Winfield who have been left out.

"We are delighted to see Tammy and Fran back in the squad," said Clare Connor, head of England women's cricket.

"Their performances during the recent England Women's Academy tour to Sri Lanka were an important part of the team's success out there, and I'm sure they will be aiming to carry this form forward to Bangladesh.

"We have opted for a mix of proven international performers such as Lydia Greenway and Sarah Taylor, alongside exciting fresh talents Jodie Dibble and Rebecca Grundy."