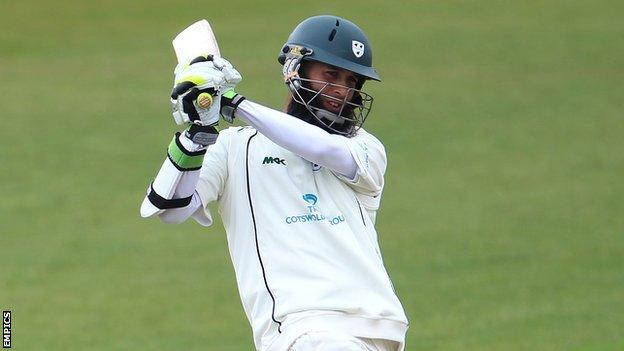 Batsman Moeen Ali's desire to change his attitude to his game helped him win his recent England call up, according to Worcestershire director of cricket Steve Rhodes.

Moeen, 26, will be part of England's limited-overs series in the West Indies and the World Twenty20 in Bangladesh.

It's good for the other players to see one of ours can, with the right attitude, gain selection

"He had a bit of a change in his approach to his cricket," Rhodes told BBC Hereford and Worcester.

"He worked out you don't get any runs back in the pavilion."

Moeen had an excellent season for Worcestershire in 2013, scoring over 2,000 runs - including a career-best 250 against Glamorgan at New Road in June - and taking more than 50 wickets with his off-spin in all competitions.

That form led to his inclusion in the England Lions squad last summer, a place with the England Performance Programme in Australia at the end of 2013 and on the Lions tour of Sri Lanka in early 2014.

And Rhodes says it was his determination to emulate some of the top batsmen in the world that has helped him improve.

"He had a good look around internationally at what the top players were doing," said Rhodes.

A useful off-spin bowler, Moeen has claimed 132 wickets at an average of 41, with best bowling figures of 6-29.

Moeen was named Player of the Year in 2013 by the Professional Cricketers Association.

"The likes of [South Africa's Hashim] Amla and [West Indies batsman Shivnarine] Chanderpaul are two guys he really respects for their run-scoring abilities.

"He set out a stall to try and bat long periods and not give it away and he saw some results.

"He's put in a lot of practice - no-one's hit more balls than him."

Moeen's recognition with the senior England squad has also given the Division Two club a huge boost, according to Rhodes.

"It's absolutely great news he's pushed through. It's good for the other players to see one of ours can, with the right attitude, gain selection," he said.

"When he signed a five-year contract it showed his loyalty to us and he knew he wouldn't play for England unless he had opportunities and we've given him that.

"To have him mixing it with the England boys keeps us on the map and in the loop internationally."