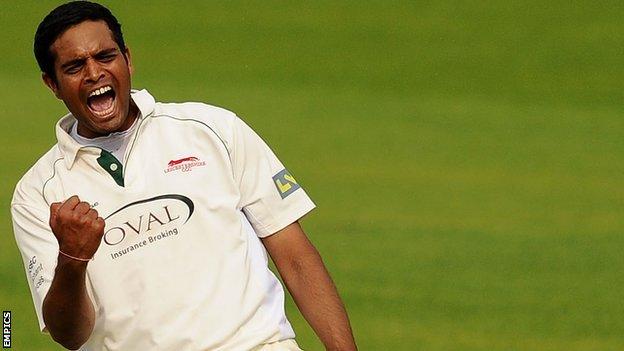 Naik, 29, has been plagued by injuries in the last 18 months, but Whitticase is convinced he can be the man to fill the void left by Swann's retirement.

"I don't think there is a better off-spinner in the country," he told BBC Radio Leicester.

"He is really high quality and he has a great opportunity in my eyes."

Naik missed two months of last season after dislocating his shoulder and he also sat out a large chunk of the previous season after damaging ankle ligaments.

"It's staying fit and producing consistent performances and contributing with the bat," Whitticase said. "We have had these chats. He just has to impress the selectors."

Born in Leicester, Naik has taken 130 wickets in 53 first-class appearances at an average of almost 33, including five in an innings on five occasions.

Monty Panesar is the most experienced spin bowling option available to the England selectors, but he only took three wickets in two Tests at a cost of 85.66 runs each during the winter Ashes series in Australia.

Durham's Scott Borthwick beat Panesar's tally with four wickets in the final Test in Sydney, but his leg-spin bowling is still a work in progress.

Whitticase does not believe playing in Division Two of the County Championship will mean Naik is overlooked by the selectors, providing he can avoid further injuries.

"He was a huge loss to us last summer," Whitticase said. "He is a high quality bowler and I am really hopeful from his point of view that he gets himself fully fit and is back bowling and looking good.

"He has been away training with the England Lions and I think he has a spark in his eye and he can see a potential opportunity. But he has to stay fit and produce performances with bat and ball - that is very much in his hands."

He added: "At the start of last season we played on some pitches that weren't spinner-friendly by any means and until he got injured he had taken 25 wickets on pitches you'd probably have played a seamer on.

"That shows the quality of the man and if we'd had him all season I am pretty sure he would have taken 50 wickets."