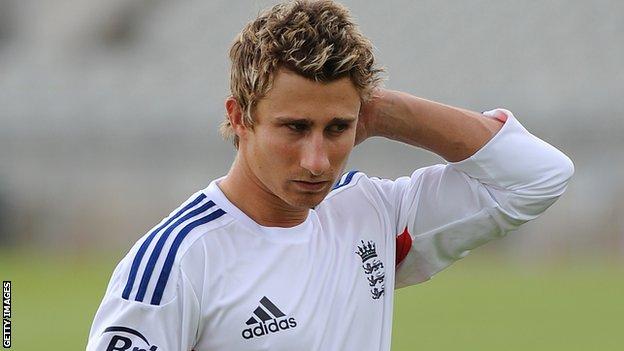 England Lions' attack were unable to overcome batting-friendly conditions as Sri Lanka A battled to a draw in the second unofficial Test at Dambulla.

Trailing by 316 on first innings, the hosts' Dimuth Karunaratne and Upul Tharanaga had an opening stand of 229.

England made only one breakthrough in the first two sessions when Tharanga chopped on to Chris Woakes for 116.

Karunaratne fell for 156 after tea, while Sam Robson claimed his maiden first-class wicket before the close.

The draw was agreed with Sri Lanka A on 357-3, leading England's second-string side by 41 overall.

Earlier, Robson (142) and James Taylor (242 not out) both improved their prospects of playing for England this summer by scoring heavily in their only innings, as Taylor added 197 with Robson and an unbeaten 147 with Liam Plunkett (74 not out) before the declaration came at 605-7.

Middlesex opener Robson, who was born in Australia, qualified to play for England at the end of last summer, while Taylor played two Tests against South Africa in 2012.

England's selectors will be looking to find another batsman following the decision to end Kevin Pietersen's international career in the aftermath of their 5-0 Ashes series defeat this winter.

Seamer Graham Onions, a late call-up for the squad, took 4-24 in Sri Lanka A's first innings, although he only bowled eight overs in the seocnd innings as spin trio Ollie Rayner, Simon Kerrigan and Scott Borthwick, all pushing to replace the retired Graeme Swann as England's spinner, did the majority of the bowling - with combined figures of 1-236 in 65 overs.

The three-match unofficial Test series finishes in Colombo on 26 February. The Lions lead the series 1-0 after winning the opening Test in Kandy by 167 runs.

Meanwhile, in Dubai, England reached the semi-finals of the Under-19 World Cup after beating India by three wickets with five balls remaining. They will play Pakistan in the last four on Monday.