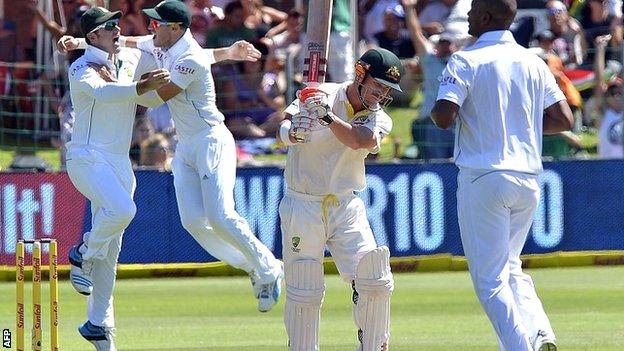 South Africa reached 192-4 to lead by 369 after day three of the second Test with Australia in Port Elizabeth, bidding to level the three-Test series.

The tourists, who won the first Test by 281 runs, resumed on 112-4 but lost David Warner in the fifth over.

Morne Morkel took 3-63 as Australia were all out for 246 soon after lunch, a first-innings deficit of 177.

South Africa batsman Hashim Amla then struck a stylish unbeaten 93 despite dislocating a finger whilst fielding.

Amla sustained the injury at gully, dropping a fiercely struck Brad Haddin shot, but showed no signs of discomfort with the bat.

There was another injury concern for the Proteas when Wayne Parnell limped off with a groin problem, but though the left-arm seamer will not bowl in the second innings, they remain in an excellent position to take the series to a deciding Test at Cape Town on 1 March.

On an immaculate, clear bright day at St George's Park, Morkel tested the Australian batsmen with some hostile pace bowling, consistently in excess of 90mph.

Seeking to keep the scoreboard moving Warner chased a wide one from Vernon Philander but could only edge to first slip, having added only five to his overnight tally.

Night-watchman Nathan Lyon departed in comical fashion in the next over, backing away from a Morkel leg-side bouncer to such an extent that his backward defensive shot was played straight into his stumps.

Steve Smith, who opened his account with successive leg glances for four from his second and third deliveries, was dropped by substitute fielder Robin Peterson on 24, but paceman Dale Steyn soon exacted his revenge with a marvellous leg cutter to uproot Haddin's middle stump for nine.

Mitchell Johnson struck some lusty blows, and was also on the receiving end as he was struck on the helmet by Morkel, continuing with the hostilities against his fast bowling counterpart.

Johnson hoisted spinner JP Duminy down the ground for four and six in consecutive balls before playing for some non-existent turn and losing his off stump on 27 to signal lunch.

In the first full over of the afternoon session, South Africa reviewed an appeal for a catch behind and TV umpire Aleem Dar deemed that there was sufficient evidence to conclude that Smith had edged Morkel one short of a sixth Test half century.

That left Australia 15 short of the follow-on target, but last man Ryan Harris quickly avoided that threat in emphatic fashion with a six over mid-wicket off Philander.

Harris made a breezy 26 from as many balls before he was caught at second slip off Morkel in the seventh over of the afternoon.

South Africa lost both openers within the opening 12 overs of their second innings but Amla shared an assured third-wicket stand of 70 with Faf du Plessis either side of tea.

Du Plessis edged a short one from Peter Siddle that held its line to depart for 24, but AB de Villiers played some typically fluent strokes, with five boundaries in his 29 as 55 were swiftly added in 11 overs.

Amla remained, punching the short ball authoritatively on the off side, but he survived a chance on 83 when keeper Haddin spilled a chance down the leg side following a brutal delivery from Johnson.