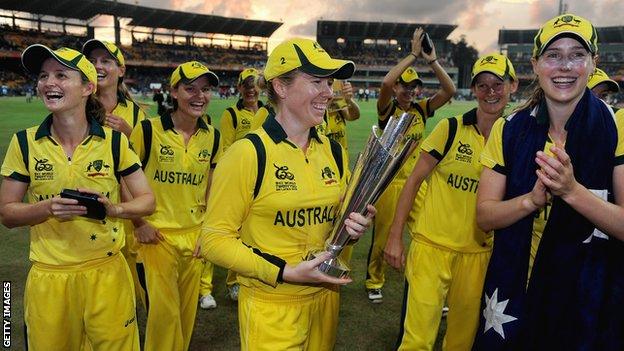 The fourth Women's World Twenty20 begins in Bangladesh on 23 March as Australia attempt to defend the crown they won in 2012.

BBC Sport takes a look at the 10 teams involved, picks out the players to watch, and reveals more about the lesser-known names involved.

Player to watch: Injury to regular skipper Jodie Fields means Meg Lanning, 21, will lead the Southern Stars' title defence. The top batter in the International Cricket Council rankings, she can call on her experience of captaincy in Australia's Ashes series defeat by England.

Did you know? After touring England with Australia in 2009, seamer Rene Farrell stayed in the UK to play for Nottinghamshire in the Women's County Championship, alongside England vice-captain Jenny Gunn.

Verdict: Have proved they have the bottle for the big occasion, and, although they will miss Fields, they have world-class players such as star all-rounder Ellyse Perry. A World T20 treble is possible, but will old rivals England lie in wait?

Player to watch: An accomplished all-round sportswoman at 24, Sophie Devine has opened the batting and/or the bowling in many of her 54 ODIs and 38 T20 internationals, while also winning 36 caps for New Zealand at hockey. Will have a key role with bat and ball and as vice-captain.

Did you know? New Zealand have finished in the top four of every global tournament run by the ICC (and before 2005, the International Women's Cricket Council). However, their only title was the 2000 World Cup, won on home soil.

Verdict: A young squad will be full of confidence after thrashing West Indies 3-0 in the one-day series and 4-0 in the Twenty20s. They should make the semi-finals as usual, but much depends on the batting of captain Suzie Bates.

Player to watch: All-rounder Dane van Niekerk has only just turned 20 but already has five years of international cricket behind her. While her leg-spin is her primary suit, she is handy enough with the bat to have shared an unbroken stand of 128 - a South Africa record in World Cups - with room-mate Marizanne Kapp against Pakistan in last year's tournament.

Did you know? Captain Mignon du Preez hit a double century in a 40-over game at the age of only 12, smashing 258 - including 25 fours and 16 sixes - in an under-13 match in Gauteng. Within five years, she was playing for South Africa.

Verdict: Will be hoping for swift revenge over Pakistan after losing to them in the final of a tri-series in Qatar in January. But will have to break new ground to progress, as they have never beaten Australia or New Zealand in a full international.

Player to watch: Seamer Asmavia Iqbal made her international debut as far back as 2005, a few days short of her 16th birthday. She has adapted well to conditions in Bangladesh, taking 2-22 and 4-16 in Pakistan's recent series against the hosts and removing three of England's middle order to almost set up a shock victory in a warm-up game.

Did you know? Ireland have been Pakistan's most frequent opponents in Twenty20 internationals. The sides have met 12 times (with 10 Pakistan wins and two Ireland victories), but Pakistan have not faced any other country more than six times in the shortest format.

Verdict: Have shown gradual improvement, helped by the introduction of central contracts for their players. Cruised past hosts Bangladesh in their most recent series but, like South Africa, have never caused an upset against one of the group favourites. Their wait may go on.

Player to watch: Opener Clare Shillington became the first woman to score a Twenty20 century for Ireland last year, smashing an unbeaten 114 from 72 balls against Japan. Ireland will need that kind of firepower if they are to cause any upsets.

Did you know? Captain Isobel Joyce and identical twin Cecelia, both in Ireland's squad, are the youngest of five siblings to have played for Ireland. While their well-known brother Ed is in the Ireland men's squad and currently captains Sussex, another brother Dom has also played three ODIs for Ireland, and eldest brother Gus played a first-class game for Ireland against Scotland in 2000.

Verdict: The lowest-ranked team in the group will entertain hopes of shocking Pakistan (whom they have beaten before) or South Africa. Like Ireland's men in the Caribbean in 2007, will enjoy the occasion and the opportunity of playing on the big stage.

World T20 history: Inaugural winners on home soil in 2009, surprisingly went out at the group stage in 2010 and were losing finalists to Australia in 2012.

Player to watch: Somerset seamer Anya Shrubsole proved in last year's World Cup and the last two Ashes series that she has the pace to unsettle most opponents in the women's game. With fellow pace bowler Katherine Brunt injured, a lot rests on Shrubsole's shoulders.

Did you know? England off-spinner Danielle Hazell is the highest-ranked bowler in the ICC's T20 rankings. Among the batters, Sarah Taylor (second) and captain Charlotte Edwards (third) are in the top three.

Verdict: After back-to-back Ashes wins, and last month's news that the team are to become full-time professionals, England will be among the favourites again. With an experienced spine bolstered by some fresh faces, they are capable of going all the way - if they are not caught cold as they were by Sri Lanka in last year's World Cup. But an Australia side out for Ashes revenge will likely stand in their way.

Player to watch: Jamaican all-rounder Stafanie Taylor is West Indies' reigning female player of the year. A hard-hitting all-rounder and more than useful off-spinner, she can expect to be busy in both departments as the Windies target another semi-final appearance.

Did you know? Left-handed batter Kyshona Knight had to wait for more than a year after identical twin Kycia's debut to play for West Indies, but both are now established in the squad. The sisters found themselves in opposition in February when Kyshona and Windies team-mates Stacy-Ann King, Vanessa Watts and Chinelle Henry made guest appearances for Canterbury against the touring West Indies.

Verdict: Despite a disappointing tour of New Zealand, a West Indies side featuring Taylor and Deandra Dottin have more batting firepower than most, and failure to make the semi-finals would be a major disappointment. From there, who knows?

Player to watch: Vice-captain Harmanpreet Kaur hit an unbeaten century against England at the 2013 World Cup. Despite some modest returns with the bat this year, she will play a major part for India in this tournament - and, at 25, an important role in their future.

Did you know? India will play a Test against England this summer at Wormsley - their first since 2006. Since then, apart from a one-off Test between the Netherlands and South Africa in 2007, women's Test cricket has been played exclusively by England and Australia.

Verdict: Disappointing results at the 2012 tournament and in last year's World Cup on home soil last year suggest this may be a side in decline. India remain reliant on the batting of captain Mithali Raj and the bowling of experienced seamer Jhulan Goswami, but may struggle to prevent England and West Indies reaching the semi-finals.

Player to watch: Powerful all-rounder Eshani Lokusuriyage - then known as Eshani Kaushalya - broke England's hearts in their opening game of the 2013 World Cup, bowling Charlotte Edwards early before smashing 56 from 41 balls to set up a famous victory.

Did you know? Lokusuriyage was also a thorn in the England back in 2009, taking 4-18 in a losing cause in a World T20 group game at Taunton. They remain the best T20 figures by a Sri Lankan.

Verdict: Shocking England last year and reaching the Super Six stage of the World Cup shows they are no longer pushovers. But they may lack the consistency to finish in the top two.

Player to watch: Captain Salma Khatun is, by a distance, Bangladesh's leading run-scorer and wicket-taker in Twenty20 internationals. A right-handed batter and off-spinner, she took 4-6 in 3.4 overs in a victory over Sri Lanka in 2012.

Did you know? Khatun, Lata Mondal and Rumana Ahmed have been ever-present in the 18 T20 internationals played by Bangladesh.

Verdict: Rank outsiders. The hosts played their first T20 less than two years ago, have never met England or West Indies, and have lost all nine meetings with India in ODIs and T20s. Sri Lanka may offer their best hope for a giant-killing.