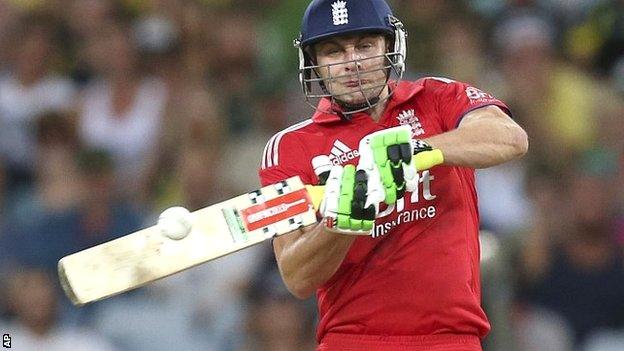 Luke Wright says he is "desperate" to be selected for England's one-day side and wants to be in pole position to take on Kevin Pietersen's mantle.

The Sussex all-rounder has only played in two one-day internationals since the 2011 World Cup.

But the 29-year-old believes the end of Pietersen's international career has given him an opportunity to impress the new England regime.

"Whenever you have a winter like that there's places up for grabs," he said.

He is currently in the Caribbean with England, who play the University of West Indies Vice Chancellor's XI on 25 February before the start of their one-day and Twenty20 internationals against West Indies.

Wright described the tour as a chance for a fresh start after the disastrous trip to Australia which resulted in team director Andy Flower standing down and Pietersen leaving the international set-up.

"It's going to be tough to break in, but you're only going to do that from performing well.

"I've just got to score big runs, get the nod first, that's all I can do. It doesn't mean you're guaranteed to get a place.

"I certainly want to get into that one-day side. I'm desperate to push for that with a World Cup coming up next year for the 50-over format. I want to be in that."