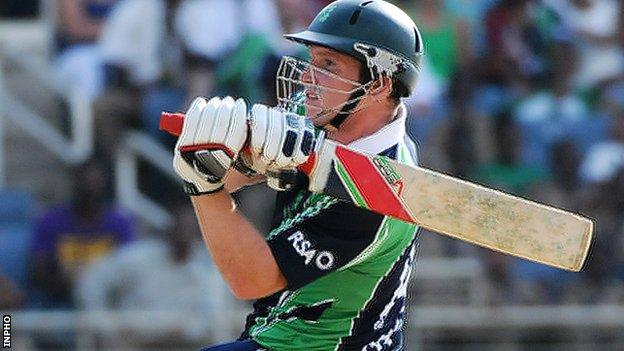 Ireland suffered a four-wicket defeat in Sunday's one-day international against the West Indies in Jamaica.

Gary Wilson top-scored with 65 after the tourists won the the toss, while Stuart Thompson added 33.

Ireland were bowled out for a modest 202 at Sabina Park before West Indies openers Dwayne Smith and Kieran Powell put on a 100-run stand.

Ireland were 54-1 after a steady start but they managed just 202 with Bravo and Jason Holder each taking three wickets.

Bravo and Marlon Samuels, who scored an unbeaten 26 from 19 balls, helped the hosts secure victory with over 13 overs to spare.

The ODI follows two Twenty20 internationals between the sides - Ireland won the first T20 by six wickets but the West Indies drew the series after winning by 11 runs on Friday.