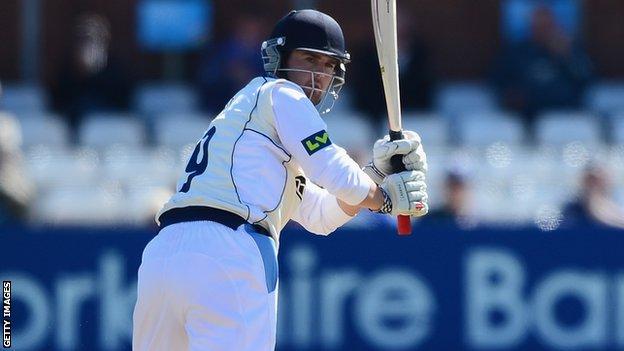 The 23-year-old left-hander, who has scored 3,213 first-class runs at an average of 29.47, left Derbyshire last November by mutual consent.

"Looking at him, he gives us scope for all formats," Whitticase told BBC Radio Leicester.

He added: "We decided over the winter that we wanted to look at him rather than just take the decision to sign him.

"We got to know him and he got to know us. We just felt it was a great opportunity, having seen him perform in the nets, to bring him on board.

"From a Championship point of of view he is capable of batting anything from one to six and the fact that he is now adding off-spin to his skills gives more options out in the field."

Redfern helped Derbyshire win promotion to Division One in 2012, scoring 848 first-class runs at an average of 38.48.

But he found his opportunities limited during the 2013 season, in which he was also troubled by a hip tendon injury, only managing to score 184 runs in seven Championship games at an average of 14.15 as Derbyshire were relegated.

Redfern is Leicestershire's second signing ahead of the new county season, following the arrival of former Kent and Nottinghamshire seam bowler Charlie Shreck.