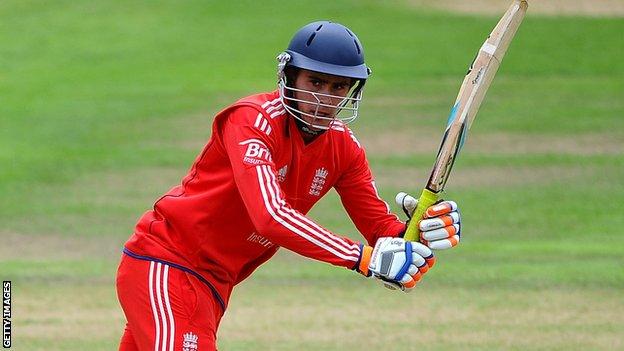 England's dream of reaching their first ICC Under-19 World Cup final since 1998 ended with a dramatic three-wicket semi-final defeat by Pakistan in Dubai.

Off-spinner Rob Sayer and 16-year-old Yorkshire seamer Matthew Fisher reduced Pakistan to 142-7 in the 37th over.

But Zafar Gohar and Amad Butt's eighth-wicket stand of 63 from 74 balls saw Pakistan home with five balls to spare.

England got off to the worst possible start in this day-night encounter, with neither Jonathan Tattersall nor his opening partner Harry Finch troubling the scorers.

Run-scoring was proving to be hard work for England's batsmen, and they only registered a respectable score thanks to Rhodes and Sayer (18 from 15 balls) clubbing 50 from the last five overs to supplement Ryan Higgins' pedestrian 52 from 99 balls which only featured one boundary.

Defending such a modest target, England desperately needed to claim some early wickets, and this they did, limiting Pakistan to 57-4 in the 15th over.

Saud Shakeel (45) and Ameer Hamza (35) hit back, adding 74 from the next 17 overs before the former fell to the impressive Sayer, whose well-flighted delivery trapped the batsman leg before.

Along with the feisty Fisher (2-21 from 10 overs), Leicestershire prospect Sayer, 19, then really frustrated Pakistan by bowling three maidens on his way to 2-39.

Unfortunately for England, however, their bowlers' hard work was undone by some uncharacteristically sloppy fielding.

The worst offender was Jack Winslade in the 48th over.

Amad slogged Sayer over the top but Winslade, standing on the long-off boundary, should have taken a steepling catch above his head.

Instead, he parried the ball over the rope for six and a visibly deflated England never recovered.

It means that instead of playing in their country's first Under-19 World Cup final in 16 years - when a side captained by Owais Shah and featuring fellow future Test players Rob Key and Graeme Swann beat New Zealand to lift the trophy - England must now prepare for a third-place play-off on Saturday against either Australia or South Africa.