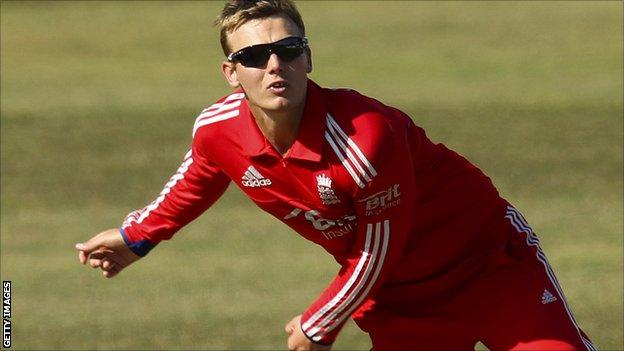 Hampshire spinner Danny Briggs is disappointed to have lost his place in England's one-day and Twenty20 squads.

The 22-year-old, who had been a short-format regular, has been left out of the current West Indies trip and the World Twenty20 squad next month.

Briggs thinks playing just one T20 game in Australia did not help his chances of keeping his place in the squad.

I only had one chance and I needed to take that. That is fair enough, it just makes this summer more important

"I was disappointed, but I didn't perform in the one chance I had," Briggs told BBC Radio Solent.

Briggs says he is determined to learn from the experience he had in Australia and the disappointment of missing out on the latest squad.

He also says a successful season with Hampshire will be key in helping him regain his place.

"It was frustrating, it was hard with how the Ashes went and then that carried on into one-day cricket," he said.

Isle-of-Wight born Briggs was hit for 53 from his four overs in his only Twenty20 game in Australia without taking a wicket and he admits he did not do himself any favours with those figures.

"It's not disappointing not to perform in that one game," he said. "You have to perform, but it sends a clear message to me to perform with Hampshire to train hard.

"I only had one chance and I needed to take that. That is fair enough, it just makes this summer more important.

"If I can perform for Hampshire and contribute then that gives me a chance to get back in at some point.

"You learn from these things and I will try and improve."