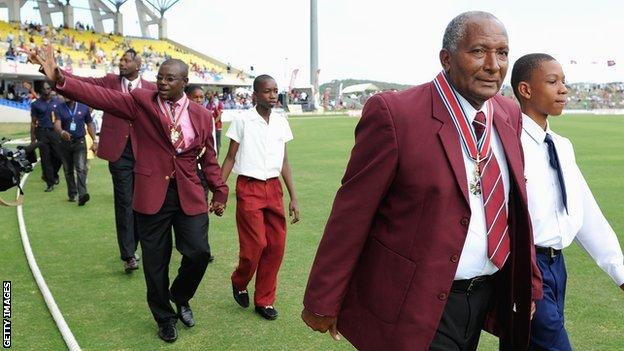 Three West Indies legends were knighted at a special ceremony during the interval of the first one-day international against England.

Former skipper Richie Richardson, 52, and pace bowlers Curtly Ambrose, 50, and Andy Roberts, 63, were all honoured by their native Antigua.

It takes the total number of West Indian cricketing knights to 11.

The only previous Antiguan cricketer to be knighted was Sir Viv Richards, after whom Antigua's new stadium is named.

Between them, Richardson, Ambrose and Roberts played in 231 Tests and 456 one-day internationals, while all had spells in English county cricket.

Free-scoring right-hander Richardson, famous for his large maroon sunhats, was one of Yorkshire's earliest overseas players in 1993 and 1994.

Ambrose represented Northants between 1989 and 1996, while also forging a fearsome new-ball partnership with Jamaica's Courtney Walsh at international level.

Roberts, the first Antiguan to play Test cricket, burst onto the English scene with Hampshire in 1974, won the World Cup with West Indies in 1975 and 1979, and also played for Leicestershire.

He was one of the 55 initial inductees into the International Cricket Council's Hall of Fame in 2009, with Ambrose inducted in 2011.

As well as Richards, the other Caribbean cricketing knights include legendary all-rounder Sir Garfield Sobers and the "three "W's" - Sir Frank Worrell, Sir Clyde Walcott and Sir Everton Weekes, who were all from Barbados, as were Sir Conrad Hunte and the Reverend Sir Wes Hall.

The list is completed by Trinidad-born Learie Constantine, who was knighted in 1962 and became the UK's first black peer in 1969.