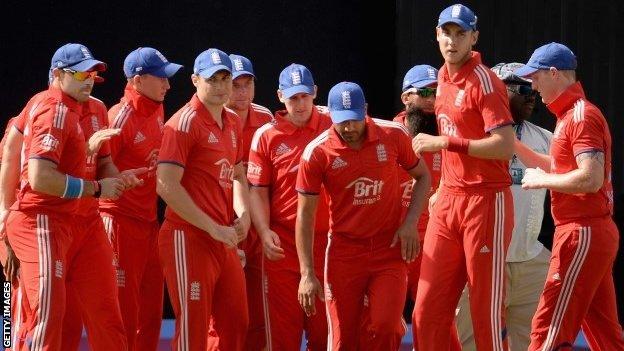 England's bowling in the latter stages of the West Indies innings cost them victory in the first one-day international in Antigua, according to stand-in captain Stuart Broad.

West Indies were 45-4 before a 116-run sixth-wicket stand from Dwayne Bravo and Darren Sammy helped them to 269-6.

"I wouldn't look too much at the batting - it was the last 10 overs with the ball that hurt us," said Broad.

West Indies scored 116 runs in their final 10 overs, compared to England's 62 in the same period.

"If we'd given the batsmen 230 to chase we'd have won," said Broad, 27. "We lost a game in Adelaide [against Australia] we should have really won, but we need to learn to win these high-pressure games.

"There will be an overriding sense of frustration in the England dressing room. They will know they should have won that game.

"You have to feel for Michael Lumb - he should have walked away with the man-of-the-match award for a century on his debut.

"But you have to take your hat off to the West Indies for the way they fought back in the game. England started off magnificently well then just fell away."

"Up to 40 overs we were fantastic. The spinners were awesome and we put ourselves in a fantastic position, but we conceded 100 off the last seven overs and we need to look at ourselves and know how we can get better."

England looked to be cruising in the early part of their innings, with debutants Moeen Ali (44) and Michael Lumb, who scored a ton on his debut, sharing a 96-run opening partnership.

Despite losing Luke Wright, Ben Stokes and Jos Buttler cheaply, the tourists still had powerful hitters in Ravi Bopara and Tim Bresnan to count on.

But the pair failed to spark in the final eight overs with victory still a possibility.

"It's not doom and gloom. We've lost this game but we did a lot of good things, especially Lumby's hundred on debut," added Broad.

Man of the match and West Indies captain Dwayne Bravo, who scored an unbeaten 87, was delighted with his side's performance.

"It was a great team effort. We didn't start well, but then [Lendl] Simmons (65) and myself laid a platform," he said.

"Over 250 we back our bowlers. In the last 15 overs, I told the guys we would win the game. [Sunil] Narine had five overs. We knew once the run-rate started to go up it would be difficult. If we held our nerve we would win. We can improve, definitely."

The next game in the three-match series will also be held in Antigua, on Sunday.