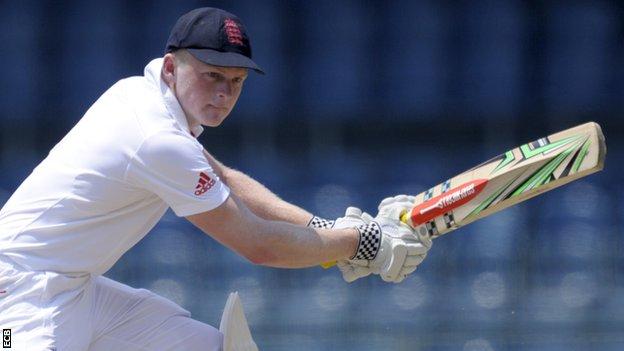 Sam Robson enhanced his claims for an England call-up with another hundred as the second-string Lions side drew to seal a 1-0 series win over Sri Lanka A.

The Middlesex opener hit an unbeaten 147 - his third ton of the tour - in the third unofficial "Test" in Colombo.

Robson, 24, who was born in Sydney, Australia but has elected to play for England, has been tipped to open for the full Test side this summer.

He ended the series with 321 runs at an average of 80, and scored five centuries this winter, including two for the England Performance Programme in Australia before Christmas.

"He has to be [in contention for an England place]," said Lions coach Mark Robinson, who described Robson's century as a "great innings".

Robson's tour tally was bettered only by Nottinghamshire's James Taylor, who scored 343 at 85, while Warwickshire all-rounder Chris Woakes averaged 68 with the bat and 22 with the ball.

Durham seamer Graham Onions, another player pushing for a return to the Test side after being overlooked for the Ashes tour, topped the wickets column with nine at 22 apiece.

The Lions won the opening Test by 167 runs in Pallekele and dominated the drawn second Test in Dambulla.

England's first Test of the summer, against Sri Lanka at Lord's, starts on 12 June.

Lions captain Woakes said: "There are potential places up for grabs come June for the England Test side, and the guys have done themselves no harm in the way they've performed on this tour."